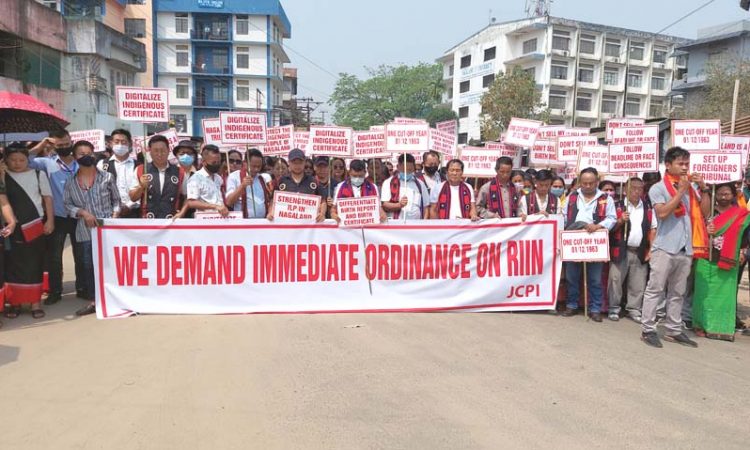 Dimapur/Kohima, March 19: The Joint Committee on Prevention of Illegal Immigrants (JCPI) has set March 31 deadline for the Nagaland Government to make necessary law to implement RIIN exercise through an ordinance.

Irked over the delay in implementation of the recommendations of the Banuo Jamir Commission on Register of Indigenous Inhabitants of Nagaland (RIIN), which was reportedly submitted to the Government in October 2020, the JCPI on Friday held rally in the State capital Kohima and commercial hub Dimapur and submitted representation “Demand for immediate implementation of RIIN exercise through an ordinance”.
In the memorandum signed by JCPI convener, Atomi Swu and secretary, Tia Longchar, the JCPI appreciated the bold initiative of the State Government for setting up of Banuo Commission for Register of Indigenous Inhabitant of Nagaland (RIIN) and being duly rectified and approved by the State Cabinet to make necessary law for state-wide exercise of RIIN with its objective to maintain a real time Indigenous Inhabitants master list.
The JCPI said the exercise is expected to render clear-cut identification of the residents in the State for the purpose of maintaining the identity, culture and privileges of the Nagas as enshrined in the Constitution (Thirteenth Amendment) Act of 1962 inserted in Article 371 A of the Constitution of India.
“Without RIIN our birthright will be lost forever, aboriginals will be reduced to secondary citizens in one’s own land,” the JCPI stated adding, “This very threat is no more an apprehension but an active process seen in the last few decades making Nagaland the next victim after Tripura in the North East India. Thus the future security of Nagaland is exposed to all potential disadvantages and self destruction.”
The JCPI reminded the Government of Nagaland that it was with the State of Nagaland Act 1962 that statehood was granted to Nagaland on December 1, 1963, so also it was vide No. Ar-8/9/6 dated Kohima, the 28th April 1977 that the “Indigenous Inhabitants” of the state of Nagaland shall be December 1, 1963 as the base for cut-off date and year.
It further stated that the state of Nagaland was delegated with the power to enforce the physical implementation of BEFR 1873 in the entire administrative jurisdiction of Nagaland but it was only with the 9th December 2019 notification that Dimapur was brought under its purview.
It stated there is serious flow in this Notification where the base year to determine the indigenous inhabitants is 21/11/1979, stating that Dimapur was constituted as Tribal Belt vide Land Revenue Department Notification No. LR/2-118/76. “This is totally unacceptable as there cannot be no two cut-off years to determine the indigenous inhabitants in the state of Nagaland which is already a tribal state since inception.
The JCPI urged the Chief Minister to enforce BEFR 1873/ILP and RIIN and other laid down protective laws of the land with a comprehensive digitalized infrastructure, mechanism and standard operating procedure with 24×7 monitoring cell under the Home Department.
The JCPI demanded that the Government immediately act on the Commission’s report and make necessary law to implement RIIN exercise through an ordinance within March 31, failing which, it cautioned that the public will have no other option but to resort to different democratic protests to achieve our desired objective.

Kohima: In the State capital, the JCPI along with various tribal hohos, legally indigenous people and civil society organizations converged outside the State Civil Secretariat and submitted the representation addressed to the Chief Minister to the Principal Secretary in CM’s office as the CM is out of station.
Earlier, JCPI members Theja Therie and Z Lohe, Sumi Hoho Kohima vice president Vixepu Swu and Kohima District GB Association president Vineipra Pienyü addressed the gathering and explained on the representation submitted to the Government and also the urgent need for implementation of RIIN.
Dimapur: The JCPI held a brief rally at DC Court junction today and submitted a memorandum to Chief Minister, through the office of Deputy Commissioner Dimapur demanding the Government to immediately act on the Banuo Commission’s report on RIIN and make necessary law to implement RIIN exercise with December 1, 1963 as the cut-off date and year in the entire jurisdiction of Nagaland state through an ordinance within March 31, 2021.
Speaking to a gathering of different tribal representative, Convenor of JCPI, Atomi Swu said that Nagaland state came into being through an understanding between the Government of India and the people of Nagaland, therefore the rights and privileges of the people must be safeguarded.
He said JCPI is not against any Government, be it the State Government or the national Government headed by different NPGs and in the same way the JCPI is not against any individual or community.
“We welcome anyone to live with us, do business and stay with us,” he said adding Nagaland cannot be a State of lawlessness and not a State of dumping garbage.
He also asked as to why outsiders should not respect the laws of the State. He said Nagaland should have the right to decide what is good for the people and right to reject or object what is not good for them.