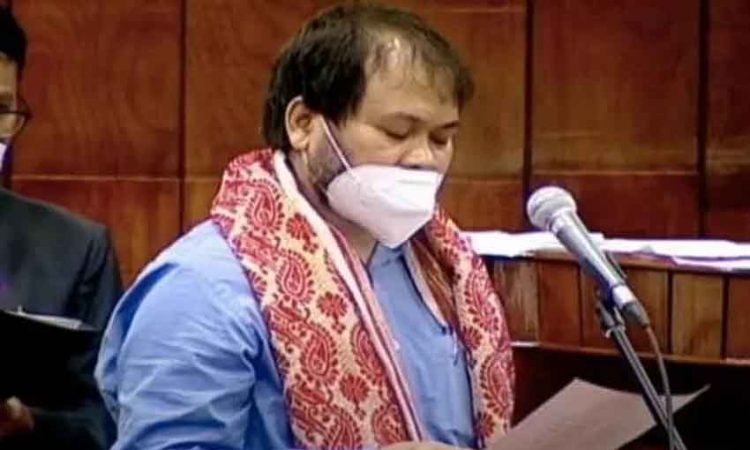 Guwahati, May 21: As the newly elected Assam Assembly convened on Friday, first time MLA Akhil Gogoi, who came for the swearing-in ceremony from prison with special permission from the courts, turned out to be a sensation with people including assembly staff rushing to take selfies with the jailed leader.

Gogoi, who contested as Independent, became the first Assamese to win an election from behind the bars without any physical campaigning. He also became the first in Assam Assembly to take oath as a prisoner MLA. He has been arrested on terror and sedition charges after leading a movement against the Citizenship Amendment Act.
Such was the craze among the Assembly staff to have a photograph with Gogoi that police, who were on duty inside the Assembly building in civil dresses, and House Marshals had to intervene.
Dozens of Assembly staff huddled in the narrow corridor of the Assembly building outside Gogoi’s room, minutes after the House was adjourned after the first half, reminiscent of crowds outside the rooms of ‘rock stars.
A lady member of the assembly staff, who declined to be identified, told PTI that she and her colleagues came to the isolated room, where Gogoi was kept after taking oath as an MLA of the 15th Assam Legislative Assembly, only to catch a glimpse of the RTI activist-turned-politician.
“I have spent 11 years in service in the Assembly and never clicked any picture with anyone we all are very excited to see Akhil Gogoi,” she added.
Police from the special cell guarded the room after crowds swelled and jostled to see the MLA, forgetting all social distancing norms amid a raging COVID-19 pandemic, and did not allow anyone thereafter to meet him.
Gogoi who heads the newly formed ‘Raijor Dal defeated BJP’s Surabhi Rajkonwari by a decisive 11,875 votes from Sibsagar constituency in the recently held Assam Assembly polls.
In the morning when Gogoi arrived in a heavily escorted convoy from the Gauhati Medical College and Hospital (GMCH), where he is undergoing treatment, he was seen being pushed by security personnel when the MLA tried to speak to media outside the main gate.
“I am an MLA of this Assembly. How can you push and drag an MLA? This is an insult … No one can silence my voice,” he shouted while being pushed inside the Assembky buiding.
Inside the House, Gogoi raised the issue with Chief Minister Himanta Biswa Sarma, who, according to the MLA, directed the Parliamentary Affairs Minister Pijush Hazarika to look into the matter.
Gogoi took oath in the name of honesty and sincerity, instead of in the name of God.
Later talking exclusively to PTI sitting at the opposition MLA’s lounge, the Raijor Dal chief said I will raise the same old questions about welfare of Assam and its people, this time in front of the chief minister, ruling and opposition MLAs,” he added.
Gogoi said he will raise his voice against any “anti- people” policies of the Assam government.
“CAA, flood havoc, COVID-19 situation, universal vaccination, big dams — these are some issues which I will raise in the House,” he said.

The National Investigation Agency (NIA) had arrested him in December 2019 for his alleged role in violent anti- Citizenship (Amendment) Act protests across the state.
Gogoi was last year admitted at Gauhati Medical College and Hospital (GMCH) for treating COVID-19 and he remains there for other ailments.
Though the Gauhati High Court upheld a bail order of Gogoi by a Special NIA Court, he is still in judicial custody as he was rejected bail in another case related to anti-CAA violence and is being investigated by the NIA. (PTI)