HomeInfotainmentIt’s impossible for an Indian to be monolingual: Amitav Ghosh
Infotainment
2 years agoJune 14, 2019No tags 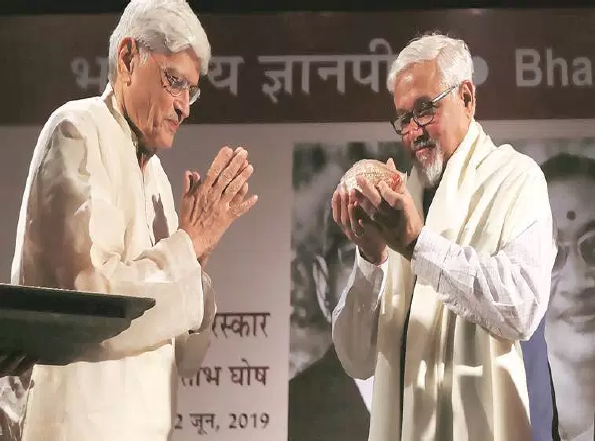 When the Jnanpith Award 2018 was announced in December last year, making him the first Indian writer writing in English to have won the coveted prize, Amitav Ghosh says he was completely taken by surprise. “I can hardly believe it still. If you grow up in an Indian literary milieu, the Jnanpith is something very special. It goes beyond literary achievements. So many of my friends, so many of the great writers that I knew – Girish (Karnad), for example, but also Mahasweta di (Mahasweta Devi) – had received it.
I feel quite overwhelmed at the thought of following in that line,” said Ghosh, 62, during the course of an interaction on Wednesday.
Later that evening, at an award ceremony at Delhi’s India Habitat Centre, Ghosh, the author of masterful works such as the Sahitya Akademi Award-winning The Shadow Lines (1988), The Hungry Tide (2004) and the more recent Ibis trilogy (2008-2015), was conferred the 54th Jnanpith Award. Speaking on the occasion, Ghosh lauded the organisers for opening the award up to writers who write in English but also emphasised on the inherently pluralistic nature of Indian languages.
“English is not, by any means, my only language…I am all too well aware that my work has been shaped, formed and enabled by the linguistic diversity and pluralism of the circumstances in which I grew up. When we use the words pluralism and diversity, we tend to think of a multi-coloured mosaic with many solid blocks of colour that join in but do not stain over into each other. But this is a false picture. There is nothing solid about the way that languages interact with each other in the Indian subcontinent. They mingle, flow and infiltrate, not just between groups but more significantly within individuals… It is impossible for an Indian to be monolingual in the manner of some Europeans and most Americans,” he said.
But these liberal principals, he said, were likely to be sorely tested in the future. “We are living in a time when writers are increasingly beleaguered, embattled and marginalised. Around the world, there is a closing of minds, a narrowing of horizons and a palpable fear of the future,” he said, adding that it would need collective effort to rise above this tidal wave of fear.
In Ghosh’s novels, history and social anthropology come together in illuminating ways to highlight the inter-connectedness of lands, economies, languages and ecologies. If in his epic Ibis trilogy, he followed the 19th-century Opium Wars that ushered in an era of free-trade capitalism, his last work of non-fiction, The Great Derangement (2016) pitched focus on the grave environmental crisis facing us. His new novel, Gun Island, released a day after the Jnanpith Award, touches upon the global migration crisis and the pitfalls of climate change through the prism of Bengali folklore.
Former Governor of West Bengal, Gopalkrishna Gandhi, 74, who was Chief Guest at the award ceremony, called Ghosh a sailor among writers, whose words carried in them the salt of the seas, the upheaval of the waves and the solidity of land. He also had a request for the writer: “Like the seasons are changing, so is our mental environment. This is a time governed by enmity, anger, wars. Our scriptures tell us about non-violence but today, we thrill not in that but in arms… I would urge him to consider administering to us yet another warning, red and unmistakable of the inflammability of hatred among communities, which translate into mutually terrorising neighbours…nations as well.”
(Courtesy: IE)