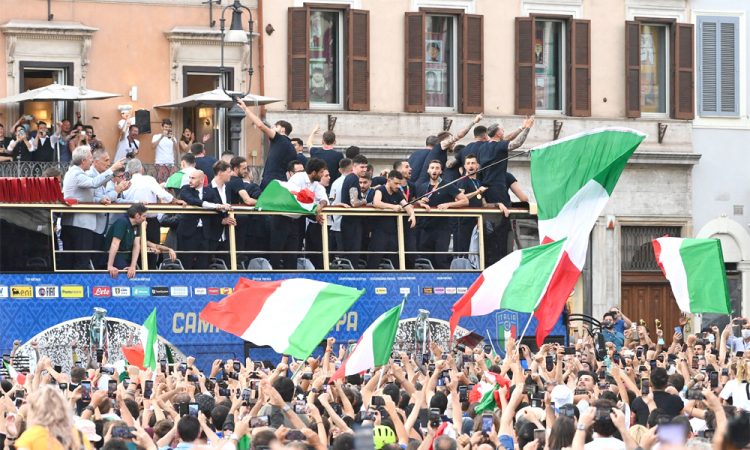 ROME, July 13: Italy’s players were feted as heroes on Monday with a day of celebrations culminating in an open-top bus ride through Rome after beating England in a dramatic penalty shootout to win Euro 2020 at Wembley.

Both Italy’s prime minister and president hosted ceremonies for the Azzurri before the team boarded a bus and made a triumphant journey through jubilant crowds waving the tricolour flag.
It capped off an emotional 24 hours that began with a night of drama at Wembley on Sunday night, when Italy recovered from the shock of conceding the quickest goal ever in a European Championship final to equalise and then claim a 3-2 shootout victory.
It is the second time the Italians have been crowned European champions and their win marks a remarkable turnaround under Mancini after the team failed to even qualify for the 2018 World Cup in Russia.
“It’s a renaissance for Italian football,” said an emotional Leonardo Bonucci.
“We have an exceptional group, we love each other, we know where we come from,” said goalkeeper Gianluigi Donnarumma, decisive in London and named best player of the tournament.
By contrast England’s failure from the penalty spot extended their dismal record in shoot-outs and left them still desperately waiting for another major trophy after the 1966 World Cup they won on home soil.
The mood was soured further after three England players who missed penalties — Marcus Rashford, Jadon Sancho and Bukayo Saka — were subjected to a stream of racial abuse online from their own and other supporters.
British Prime Minister Boris Johnson led condemnation of the “appalling abuse”, while England manager Gareth Southgate said it was “unforgivable”.
The Italy team had landed back in Rome early on Monday morning, with captain Giorgio Chiellini and coach Roberto Mancini lifting the gleaming trophy aloft as they stepped off the plane.
Around 200 fans who got up early — or never went to bed — greeted them at their hotel, chanting “We’re the champions of Europe!”.
There had been questions over whether they would hold the traditional victory parade due to concerns over coronavirus, which swept through Italy in February last year and has since claimed almost 128,000 lives.
But after meeting with President Sergio Mattarella and Prime Minister Mario Draghi the team — all wearing their medals — were given the chance to greet the fans properly.
“We are happy to have given joy and hope to the Italians after such a difficult period,” Mancini told reporters earlier.
On Sunday night, fans spilled on to the streets from Milan to Palermo to celebrate their side’s triumph, pushing aside thoughts of the pandemic.
Some fans were bleary-eyed Monday after late night carousing, ordering double espressos to revive themselves.
In Rome, greengrocer Matteo Falovo spoke for many when he said that after 17 months of the virus, which hit Italy hard, it had been “a pleasure to be able to think about something else”.
The atmosphere around Wembley was frenzied in the build-up to the match and footage posted on social media showed hundreds of supporters battling to get past lines of stewards and police, with some able to force their way through security cordons.
Another video appeared to show violent clashes between fans inside Wembley itself.
London police said they made 49 arrests, and that 19 officers were injured while managing the final.
Back in Rome, Chiellini on Monday dedicated the win to the Italian fans and former Italy and Fiorentina defender Davide Astori, who died aged 31 after suffering a cardiac arrest before an Italian league match in 2018.
Addressing the audience in the grounds of Mattarella’s Quirinale palace, he paid tribute to his teammates.
“We are not here because we scored an extra penalty, but because we believed in the values of friendship,” he said.
“This success is a group victory. This bond made us feel like brothers of Italy to answer the call together.”
Five Italy, three England players in Euro 2020 team of the tournament
Five players from champions Italy and three from runners-up England were named in the Euro 2020 team of the tournament announced by European soccer’s governing body UEFA on Tuesday.
Italy goalkeeper Gianluigi Donnarumma — who was named the Player of the tournament — along with defenders Leonardo Bonucci and Leonardo Spinazzola, midfielder Jorginho and winger Federico Chiesa were all selected in the line-up.
Italy won the Euros for the first time since 1968 as Donnarumma saved two England penalties en route to a 3-2 shootout win after the teams had fought out a 1-1 extra-time draw in Sunday’s final at Wembley.
England right back Kyle Walker, centre back Harry Maguire and forward Raheem Sterling were also included in the team of the tournament, which was named by UEFA’s technical observer team.
Spain midfielder Pedri, who was named the Young Player of the tournament, was also among the top 11 players, alongside Denmark’s Pierre-Emile Hojbjerg and Belgium’s Romelu Lukaku.

Sterling scored three goals for England, while Lukaku scored four times for Belgium, who were knocked out by Italy in the quarter-finals. (AFP/Reuters)