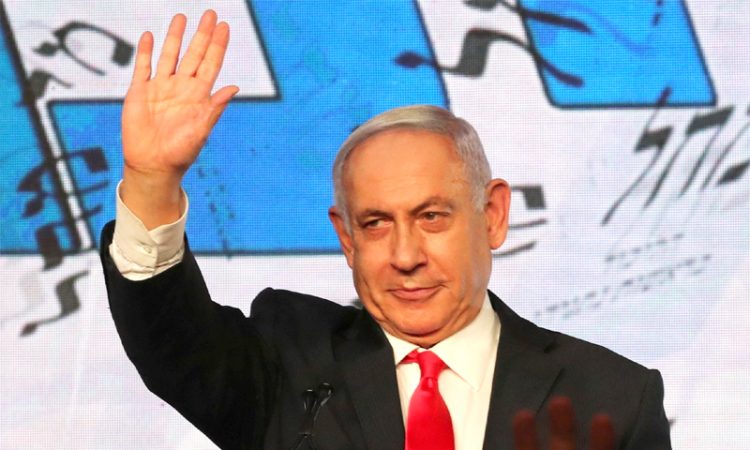 Jerusalem, April 6: Israel’s president on Tuesday handed Prime Minister Benjamin Netanyahu the difficult task of trying to form a government from the country’s splintered parliament, giving the embattled leader a chance to prolong his lengthy term in office while on trial for corruption charges.

In his announcement, President Reuven Rivlin acknowledged that no party leader had the necessary support to form a majority coalition in the 120-seat Knesset. He also noted that many believe Netanyahu is unfit to serve in light of his legal problems.
Nonetheless, he said that there was nothing in the law preventing Netanyahu from serving as prime minister and that after consulting with the 13 parties in the newly elected parliament, he believed that Netanyahu had the best chance of any candidate of forming a new government.
No candidate has a realistic chance of forming a government that will have the confidence of the Knesset, Rivlin said. But, he said, Netanyahu has a slightly higher chance of being able to.
“I have decided to entrust him with the task,” Rivlin said from Jerusalem. Netanyahu now has up to six weeks to try to cobble together a coalition during his trial.
The decision nudged forward the twin dramas over the country’s future and Netanyahu’s fate, giving Israel’s longest-serving premier a fresh chance to try to salvage his career. Though Netanyahu currently lacks a majority of support and is on trial, Rivlin nonetheless said he has the best chance of being able to cobble together a governing coalition.
Netanyahu now has up to six weeks to complete the task and avoid sending Israel to an unprecedented fifth consecutive election.
Rivlin issued the mandate with something short of full-throated support, pointing out that moral questions hovered over the decision.
Netanyahu holds the most support – 52 seats – in Israel’s splintered Knesset. But that is still short of a 61-seat majority. He is likely to use his powers of persuasion to try to lure a number of opponents, including a number of former close aides who have vowed never to serve under him again, with generous offers of powerful government ministries or legislative committees.
Rivlin’s decision merges questions of Netanyahu’s legal and political future in what’s perhaps the starkest political challenge of his career.
In court, he faces fraud, breach of trust and bribery charges in three separate cases. Proceedings resumed Tuesday, though the premier was not expected to appear in court.
A key witness on Monday cast Netanyahu as an image-obsessed leader who forced a prominent news site to help his family and smear his opponents.
Netanyahu denies all charges and in an nationally televised address accused prosecutors of persecuting him in an effort to drive him out of office.
This is what a coup attempt looks like, he said.
While a ruling could be months or even years away, the proceedings are expected to take place up to three days a week, an embarrassing and time-consuming distraction that is certain to amplify calls for Netanyahu to step aside.
Monday’s court session focused on the most serious case against Netanyahu – in which he is accused of promoting regulations that delivered hundreds of millions of dollars of profits to the Bezeq telecom company in exchange for positive coverage on the firm’s popular news site, Walla.
Ilan Yeshua, Walla’s former chief editor, described a system in which Bezeq’s owners, Shaul and Iris Elovitch, repeatedly pressured him to publish favourable things about Netanyahu and smear the prime minister’s rivals.
The explanation he was given by the couple? That’s what the prime minister wanted, he said. (AP)