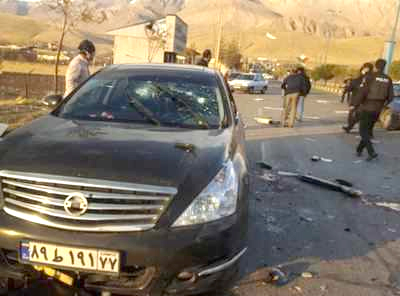 The scene where Mohsen Fakhrizadeh was killed in Absard, a small city just east of Tehran, on Firday

JERUSALEM, November 28 : Israel put its embassies around the world on high alert on Saturday after Iranian threats of retaliation following the killing of a nuclear scientist near Tehran, Israeli N12 news reported on Saturday.
A spokesman for the Israeli Foreign Ministry said the ministry did not comment on matters of security regarding its representatives abroad.
Iran has blamed Israel for the killing of Mohsen Fakhrizadeh, who died on Friday after gunman ambushed him in his car.
Iran’s supreme leader promised on Saturday to retaliate for the assassination of the Islamic Republic’s top nuclear scientist, who the West and Israel believed was the architect of a secret Iranian programme to make weapons.
Ayatollah Ali Khamenei, Iran’s top authority who says Tehran has never sought nuclear arms, promised in his statement on Twitter to continue the work of Mohsen Fakhrizadeh, who died on Friday after gunman ambushed him in his car near Tehran.
The killing, which Iran’s president was swift to blame on Israel, threatens to spark a new Middle East confrontation in the final weeks of U.S. President Donald Trump’s term.
It could also complicate any efforts by President-elect Joe Biden to revive a detente with Tehran that was forged when he was in Barack Obama’s administration. Trump pulled Washington out of the 2015 international nuclear pact agreed with Tehran.
Khamenei said in his Twitter post that Iranian officials must take up the task of “pursuing this crime and punishing its perpetrators and those who commanded it.”
Iranian President Hassan Rouhani told a televised cabinet meeting that Iran would respond “at the proper time.”
“Once again, the evil hands of Global Arrogance and the Zionist mercenaries were stained with the blood of an Iranian son,” he said, using terms officials employ to refer to Israel.
Israel has declined to comment on the killing. The White House, Pentagon, U.S. State Department and CIA also declined to comment, as did Biden’s transition team.
‘REMEMBER THAT NAME’
At least four scientists were killed between 2010 and 2012 in what Tehran said was a programme of assassinations aimed at sabotaging its nuclear energy programme. Iran has always denied pursuing nuclear weapons, saying its aims are only peaceful.
The semi-official Tasnim news agency reported that an explosive-laden car exploded near Fakhrizadeh’s vehicle and one of the assassins then sprayed it bullets. The scientist was taken to a hospital nearby, where he died.
Fakhrizadeh had no public profile, but was thought to have headed what the International Atomic Energy Agency (IAEA), UN nuclear watchdog, and the US intelligence services believe was Iran’s nuclear arms programme, shelved in 2003.
He was the only Iranian scientist named in the IAEA’s 2015 “final assessment” of open questions about Iran’s nuclear programme. It said he oversaw activities “in support of a possible military dimension to (Iran’s) nuclear programme”.
He was a central figure in a presentation by Israeli Prime Minister Benjamin Netanyahu in 2018 accusing Iran of continuing to seek nuclear weapons. “Remember that name, Fakhrizadeh,” Netanyahu said at the time.
U.S. intelligence services and the International Atomic Energy Agency believe Iran halted its coordinated weapons programme in 2003.
The IAEA said it had no credible indications of activities in Iran relevant to the development of a nuclear explosive device after 2009.
Rouhani accuses Israel of killing nuclear scientist
Iran’s president on Saturday accused Israel of killing a prominent Iranian scientist long suspected by the West of masterminding a secret nuclear bomb programme, state TV reported.
Iran’s clerical and military rulers have threatened revenge for Friday’s killing of Mohsen Fakhrizadeh, who Iranian media said died in hospital after assassins gunned him down in his car near Tehran.
“Once again, the evil hands of global arrogance were stained with the blood of the mercenary usurper Zionist regime,” a term for Israel, President Hassan Rouhani said in a statement, according to state TV.
“The assassination of martyr Fakhrizadeh shows our enemies’ despair and the depth of their hatred… His martyrdom will not slow down our achievements.” (Reuters)