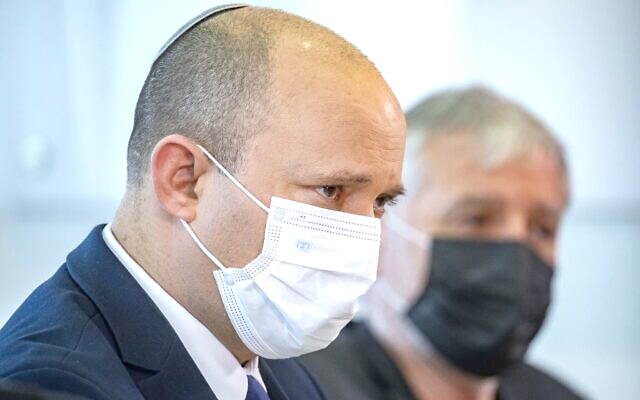 Jerusalem, August 1: Israel’s Prime Minister Naftali Bennett on Sunday blamed Iran for a deadly drone attack on an Israeli-operated oil tanker off the coast of Oman, saying Tehran has made a “serious mistake” and Tel Aviv will convey this message in its “own way”.

Bennett’s veiled threat to retaliate comes hours after Iran denied its involvement in bombing off the coast of Oman on Thursday night.
Two crewmen, a British and a Romanian national, died in the attack off the coast of Oman on the oil tanker Mercer Street, a ship operated by Zodiac Maritime, a London-based company belonging to Israeli shipping tycoon, Eyal Ofer.
While no one has claimed responsibility for the attack, Israel has alleged that the attack was carried out by suicide drones that hit the ship.
“I just heard that Iran, in a cowardly manner, is trying to evade responsibility for the event. They are denying this. Then, I determine, with absolute certainty Iran carried out the attack against the ship, Prime Minister Bennett said at the start of a weekly Cabinet meeting on Sunday.
“The intelligence evidence for this (Iran’s involvement) exists and we expect the international community will make it clear to the Iranian regime that they have made a serious mistake. In any case, we know how to send a message to Iran in our own way,” he said, hinting at a possible retaliatory move.
“Iran’s thuggishness endangers not only Israel, but also harms global interests, namely freedom of navigation and international trade,” he claimed.
Iran on Sunday denied the allegations, calling them Israel’s “blame games”.
Iranian Foreign Ministry spokesman Saeed Khatibzadeh described the claims of Tehran’s involvement as “baseless.”
“Such blame games are nothing new,” Khatibzadeh said. “Those who are responsible for this (attack) are the ones who made it possible for the Israeli regime to set its foot in this region”.
The incident is the first known fatal attack even though several attacks on commercial shipping lines have been reported in the international media over Israel-Iran nuclear tensions.
Israel calls Iran’s nuclear programme an existential threat which it has vowed to stop by all measures possible. Tehran maintains that its nuclear programme is meant for peaceful purposes.
Iran blames Israel for a series of attacks targeting its nuclear program.
Meanwhile, Israeli Foreign Minister Yair Lapid spoke to US Secretary of State Antony Blinken as well as his British and Romanian counterparts over the last three days to coordinate an international response to the attack.
Blinken and Lapid agreed to work with other allies “to investigate the facts, provide support, and consider the appropriate next steps”.
Israel believes that Iran carried out the deadly attack on the oil tanker in response to a recent cyber attack Tehran believes was carried out by the Jewish state, local media reported on Saturday.
The cyber attack in early July is said to have caused chaos in the Islamic Republic’s train system as hackers posted fake messages about alleged train delays or cancellations on display boards at stations across the country.
They also reportedly urged passengers to call for information, listing the phone number of the office of the country’s Supreme Leader Ayatollah Ali Khamenei.
A Channel 13 news report, without citing its sources, claimed that in Israel’s assessment Tehran was directly responding to those alleged attacks.
The report further claimed that Iran was hoping to raise insurance costs for ships with ties to Israel in attempts to hurt its economic interests.
State-owned Iranian news network, Al-Alam, on Friday reported citing “well-informed sources” that the attack was in response to a reported Israeli strike in Syria that killed “two resistance men” last week.
Israeli Defence Minister Benny Gantz called for an urgent discussion on Friday with IDF Chief of Staff Aviv Kohavi and other defence officials.
Lapid on the other hand said that he had instructed Israeli diplomats to push for UN action against “Iranian terrorism”.

“I’ve instructed the embassies in Washington, London and the UN to work with their interlocutors in government and the relevant delegations in the UN headquarters in New York,” the foreign minister said on Twitter. (PTI)