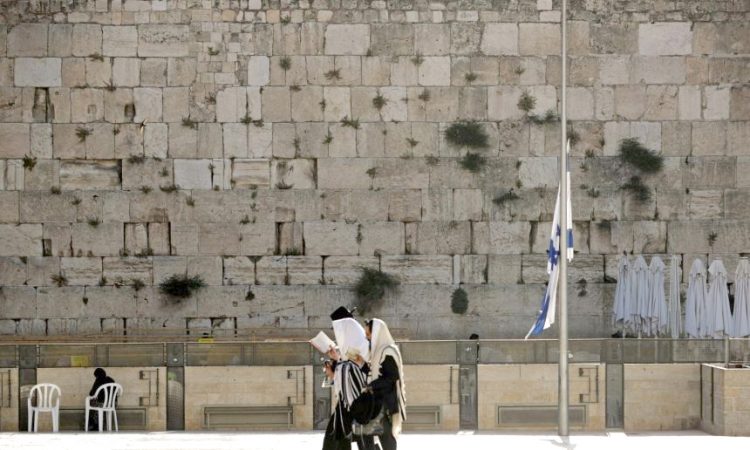 The Israeli national flag was lowered to half-mast on May 2, 2021, as the country observes a day of mourning after dozens were crushed to death in a religious festival stampede. PHOTO: REUTERS

JERUSALEM, MAY 2: Israel observed a day of mourning on Sunday for 45 people crushed to death at a Jewish religious festival, with flags lowered to half-staff and questions raised about accountability for one of the country’s worst civilian disasters.

In accordance with Jewish tradition, funerals were held with as little delay as possible. More than 20 of the victims of Friday’s disaster on Mount Meron were buried overnight after official identification was completed.
“I only wish that we achieve even a small fraction of your stature in studies and holy devotion,” Avigdor Chayut said, eulogising his 13-year-old son, Yedidya, at a funeral in the town of Bnei Brak, near Tel Aviv.
The victims died when an overnight annual pilgrimage by large crowds of ultra-Orthodox faithful to the tomb of a 2nd-century Jewish mystic, Rabbi Shimon Bar Yochai, in northern Israel ended in a stampede.
Witnesses described a pyramid of bodies, including several children, in a packed and slippery metal-floored passageway.
Israeli media outlets estimated that some 100,000 people attended the event, numbers that underscored a relaxing of Coronavirus restrictions in a country that had sped ahead of others in its vaccination rollout.
Evidence was mounting that it was a disaster waiting to happen at a pilgrimage site that state investigators had labelled years ago as hazardous.
Questions were also being raised as to whether the Government and police had been reluctant to reduce the crowd size so as not to anger influential ultra-Orthodox rabbis and politicians.
“A thorough inquiry is required,” Culture Minister Hili Tropper told Kan public radio. “This terrible disaster will help everyone understand … that there should be no place where the state does not set the rules.”
The Justice Ministry said investigators would look into whether there had been any police misconduct.
Netanyahu promises investigation
Police and regional government officials said the Mount Meron site was administered by 4 separate private religious groups, making oversight difficult.
Prime Minister Benjamin Netanyahu promised an investigation. His presidential mandate to form a new government, after an inconclusive March 23 election, expires on Wednesday, but public calls to determine responsibility for the tragedy seemed certain to hound any incoming administration.
The US Embassy said US citizens were among the dead and injured, but did not immediately name them.
US media have identified some of the dead, including a 19-year-old who was in Israel on a gap year. Two Canadians were killed in the disaster, Canadian Prime Minister Justin Trudeau said on Friday.

Condolences poured in from leaders around the world, including US President Joe Biden and Palestinian President Mahmoud Abbas. (Agencies)