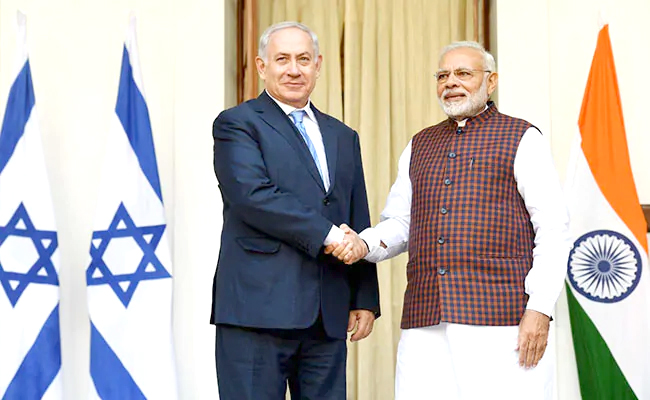 Jerusalem, November 27: Israeli Prime Minister Benjamin Netanyahu has said that his country is India’s partner in its quest for a future with low carbon and pollution levels, and exuded confidence that solar energy would constitute over 25% of his country’s energy supply by 2030.
Addressing a digital conference of the India-led International Solar Alliance (ISA), he said obstacles to conserving solar energy would have to be overcome to ensure supply on days when there is no sun.
“We want a future with less carbon and less pollution, a future based on green energy and that’s why I welcome this vital initiative by Prime Minister (Narendra) Modi and I want to assure you that Israel is your partner in this quest,” a government release quoted Netanyahu as saying.
“I believe that the most important renewable energy is ingenuity and innovation. And all the countries represented here, beginning with India and Israel, and all of you, are committed to seizing innovation in order to seize the future. And on that I think we can all be very, very hopeful,” he said on Thursday.
Netanyahu attended the digital conference on the personal invitation of his Indian counterpart Narendra Modi.
The ISA, which seeks to harness the power of the sun to reduce pollution and carbon footprint, is an initiative of Modi. Over 80 countries are members of the alliance.
India was re-elected as president of the ISA for a term of two years at its third assembly in October.
Netanyahu noted that the sun is almost the exclusive source of renewable energy in his country.
Approximately 10% of Israel’s energy consumption originates in solar energy. Solar energy would constitute over 25% of Israel’s energy supply by 2030, he said.
The Israeli prime minister said the obstacles to conserving solar energy would have to be overcome in order to provide it when there is no sun, he said.
Netanyahu pointed out that hundreds of Israeli start-ups are active in the solar sector today following an investment of billions of dollars.
Dutch Prime Minister Mark Rutte and ministers from India, Denmark and Britain also attended the digital conference.
The ISA was jointly launched by Modi and then French President Francois Hollande at the UN Climate Change Conference in Paris in November 2015.
It is a major global initiative for the implementation of the Paris Climate Agreement, envisioning rapid deployment of solar energy units.
The ISA Framework Agreement was opened for signature during the United Nations Climate Change Conference in Morocco in November 2016 and the ISA became a treaty-based intergovernmental body in December 2017. (PTI)