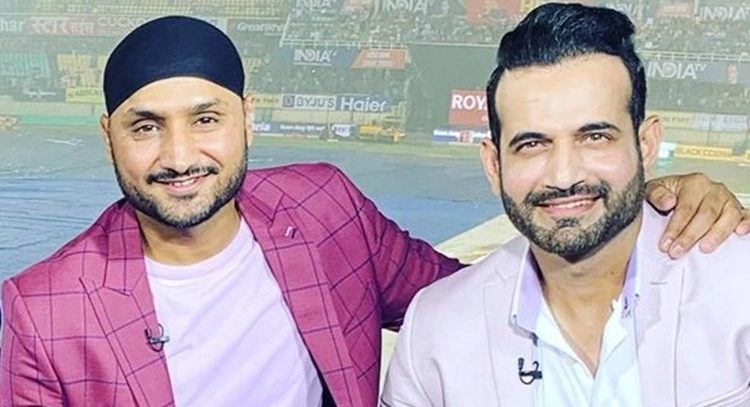 Former Indian cricketers Irfan Pathan and Harbhajan Singh are set to make acting appearances in two upcoming Tamil projects, the makers have announced. These films will mark their debuts in Tamil film industry.
While Irfan will be seen playing the antagonist in Vikram’s next yet-untitled project, Harbhajan will be seen playing a ‘surprise role’ in Santhanam’s upcoming Tamil comedy Dikkilona.
In Vikram’s upcoming project with director Ajay Gnanamuthu, Irfan will be seen playing a suave baddie and in an action-packed role. Apparently, it was Ajay’s idea to rope in Irfan as he felt the unique casting will do wonders to the project. Dubbed Chiyaan Vikram 58, the project is currently on the floors.
Irrfan is expected to join the sets very soon. In the film, Vikram will be seen in 25 get-ups, and his looks will be designed by a US-based company. If these reports are true, then Vikram will be first actor in the world to set a world record for donning 25 looks in a film.
Going by the first look poster which featured Vikram sporting different get-ups, the reports doing the rounds about the star playing so many looks could very much be true.
In a recent chat with Times of India, director Ajay Gnanamuthu said: “The only thing I can divulge right now is that Vikram’s role will be a challenging one. Of course, he has always taken up challenging roles, but I think this one will be better than all of those.”
Harbhajan, on the other hand, is believed to be signed for an extended cameo in Dikkilona, which is being directed by Karthik Yogi.
Harbhajan is not new to Tamil audiences as he’s been part of Chennai Super Kings (CSK) cricket team for many seasons. Also, This will not be his first brush with cinema as he has earlier made special appearances in Mujhse Shaadi Karogi, and the Punjabi films, Bhaji in Problem and Second Hand Husband.