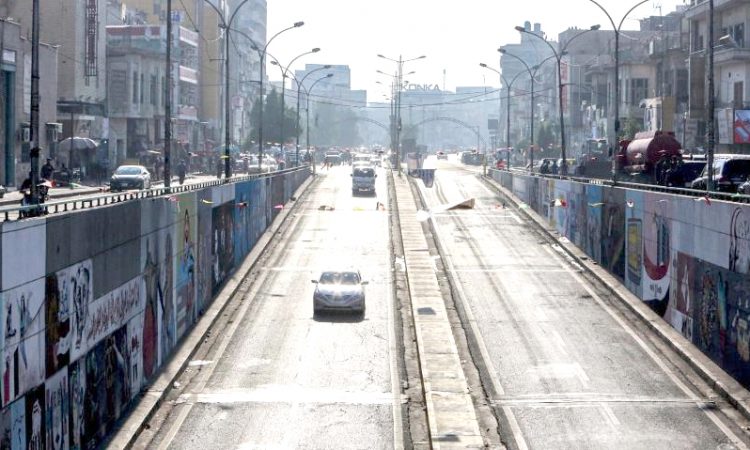 BAGHDAD, October 31: Iraqi authorities reopened Baghdad’s Tahrir Square and AlJumhuriyah bridge on Saturday, symbolically ending more than a year of demonstrations in epicentres of an anti-government protest movement.
Protester tents have been dismantled at the Tahrir roundabout, now again circled by cars, and the towering concrete walls used to close off the AlJumhuriyah bridge across the Tigris River have been removed.
Tahrir Square and its massive Freedom Monument was at the heart of the movement that brought together hundreds of thousands of Iraqis in October 2019, paralysing the capital and southern Iraq for months.
The Al-Jumhuriyah bridge leading to the highly fortified Green Zone — where government offices, parliament and the US embassy are housed — was a hotspot of clashes during the protests.
Clashes with security forces during the revolt left around 600 people dead and 30,000 wounded, the vast majority demonstrators.
“The reopening of these places does not mean the revolt is over,” said Kamal Jabar, one of the figures of the movement dubbed the “October Revolution”.
“The protesters have lost a battle, but the movement endures and is now working to set up political organisations,” he told AFP.
The movement had called for jobs, basic services, a total overhaul of the ruling class and an end to corruption.
But it lost momentum and then ground to a halt in the spring due to an outbreak of tensions between arch-foes the United States and Iran on Iraqi soil and the Covid-19 pandemic.
The protests helped usher in Prime Minister Mustafa al-Kadhemiin May, but he has yet to deliver on any major reforms.
Lockdown measures imposed to stem the virus and the fall in oil prices precipitated Iraq’s tumble into its worst economic downturn and doubled the country’s poverty rate to 40 percent.
Amid the crisis, public pressure mounted to reopen Tahrir Square and AlJumhuriyah bridge to ease traffic in Baghdad — a city of 10 million inhabitants — and to revive trade in the centre of the Arab world’s second most populated capital. (AFP)