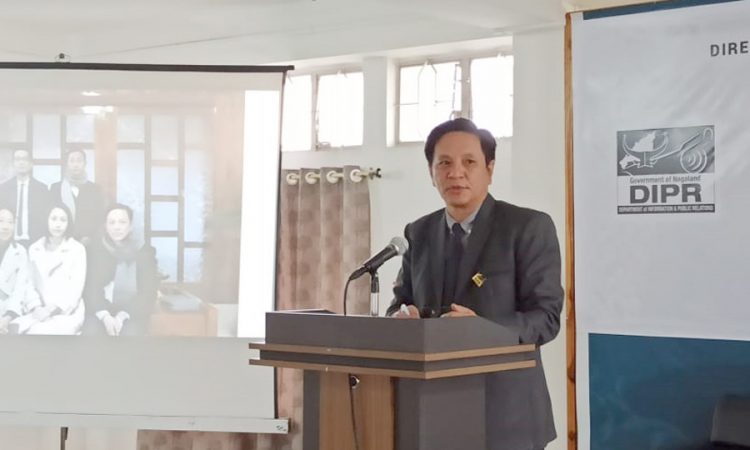 Dimapur, October 31: The farewell programme for retiring Director, IPR, LimawatiAo was held on October 31 at the IPR conference hall, Directorate of Information and Public Relations.
Retiring Director, IPR Limawati Ao in his farewell speech narrated his journey in the Department where he first joined as an Information Officer and subsequently his district postings in Wokha and Mokokchung as DPRO. He said he was encouraged by the attitude of senior officers about the main objectives of the department and he himself having an interest in writing and reading motivated him to give his best service for the upliftment of the department. He called it his fate that he was appointed to serve in the department of IPR, as he enjoyed the work assigned to him to serve the government and the people, which has led him to his success.
He spoke about the struggles and difficulties he faced while serving as an officer in the districts due to lack of proper equipment and technologies in earlier days but had managed to perform his duties with any available resource. In the Directorate too, Limawati said there were hardships but today, with the inputs and contributions from the officers and staff, the IPR department is the front runner in technology to carry out all the work through modern technologies and the efficient staff behind it all. He said today the Department is recognized and being looked up for the services rendered to the people and to the Government.
This, he said, was successful due to the cooperation, efforts, contributions, inputs enthusiasm and hardwork of all the officers and staff and he called on all to be proud of these achievements and also enjoy the work assigned as this will lead the department to success.
Advisor, IPR, SCERT & Village Guards, Toshi Wungtung remarked that the outgoing Director Limawati Ao was an inspiring director with outstanding leadership quality and an efficient administrator. He stated that IPR has been a glamorous department under his directorship and quoted him “Truly a captain of the Ship”. He also pointed that all this became possible because of the love, respect and teamwork that exist in the department.
He said that the retiring Director will be leaving a priceless legacy, a legacy which cannot be bought rather, which can only be achieved through good personality and character. Work ethics is the most important thing in an institution or an organization and he believed that the least the department can do is follow the legacy of work ethics and tributes which Limawati leaves behind. Wungtung appreciated the contributions made towards the department and hoped his successors would continue to bring forward the department to be a monument among other departments in the state.
State Transport Commissioner, Elias Lotha and Director, Employment, Skill Development, Chiten Yaden also recounted their days while posted in the same district and also their association with the Director at all levels. Other speakers included Joint Director IPR, Dzuvinuo Theunuo, Deputy Director, IPR, Siewatho S. Nyusou and DPRO Dimapur, Lolano.
On the occasion two books published by the Department of IPR – A pictorial monograph titled ‘Nagaland Album – A Photographic Journey’ and a reference booklet titled ‘An Insider’s Guide for DIPR Officials’ were released by Advisor, IPR, SCERT & Village Guards, Toshi Wungtung and the retiring Director, IPR Limawati Ao. The programme was chaired by Deputy Director, IPR Asangla Imsong.
(Page News Service)

Business as usual on Aug 3: CNCCI