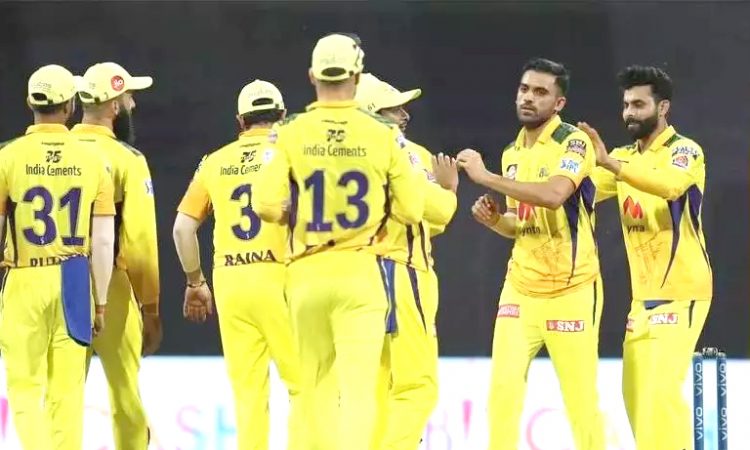 After medium-pacer Chahar’s four for 13 enabled CSK to restrict the Punjab team to a below-par 106 for eight, Moeen Ali (46, 31 balls, 7x4s, 1×6) put on 66 runs for the second wicket with opener Faf du Plessis (36 not out, 33 balls, 3X4s, 1X6) to secure the win for the three-time champions.
CSK finished at 107 for four in 15.4 overs with Sam Curran (5 not out) scoring the winning runs.
With the target in sight, CSK lost the wickets of Suresh Raina (8) and Ambati Rayudu (0) to Mohammed Shami (2/21) in consecutive balls in the 15th over.
Ali opened up after a rather cautious start, and played some lovely drives and also hit a big six. He was holed out to Shahrukh Khan in the deep off leggie Murugan Ashwin (1/32) with CSK needing 17 runs for victory.
Arshdeep Singh provided the early breakthrough for Punjab, when he had a struggling Ruturaj Gaikwad (5) caught at deep mid-wicket.
However, the Aussie pace duo of Jhye Richardson and Riley Meredith could not make much of an impression for the second consecutive game.
Earlier, Chahar rocked the Punjab batting line-up with a superb four-over spell during which he picked up four wickets, including that of ‘Universe Boss’ Chris Gayle.
Aiming to bounce back after being outclassed by Delhi Capitals in their opening match, CSK bowlers justified skipper Mahendra Singh Dhoni’s decision to bowl first by reducing Punjab to 26 for four in the powerplay (first six overs) and then to 26 for five before M Shahrukh Khan (47 off 36, 4X4s, 2X6s) led a brief revival.
Chahar started the Punjab slide in the very first over by sending back Mayank Agarwal (0) with a beauty which nipped away from middle stump to hit the off stump. Chahar kept up the pressure and increased CSK’s woes with his consistency and conceded only two fours in his four-over spell.
In-form Punjab skipper KL Rahul (5) was run-out by a brilliant direct hit from Ravindra Jadeja, who was fielding at short-cover, as the batsman tried to scramble for a single.
Jadeja was in the act in the fifth over again, grabbing a superb catch, diving full-length to dismiss Gayle for 10 to give Chahar his second wicket.
Nicholas Pooran bagged his second straight duck, pulling a short delivery straight into the hands of Shardul Thakur at long-leg.
Deepak Hooda (10), who played a blinder in Punjab’s first match against Rajasthan Royals, could not repeat his heroics, lobbing a simple catch to du Plessis as the team slipped to 26 for five in the seventh over.
amil Nadu’s power-hitter Shahrukh Khan was the only Punjab batsman to make an impression before falling to Sam Curran in the final over as CSK was all over their opponent.
Shahrukh Khan and Jhye Richardson (15, 22 balls, 2x4s) added 31 runs for the sixth wicket, in what was the best partnership of the innings.
Murugan Ashwin (6) then added 30 runs with his Tamil Nadu teammate Khan to help Punjab’s cause in an otherwise nightmare night for them.