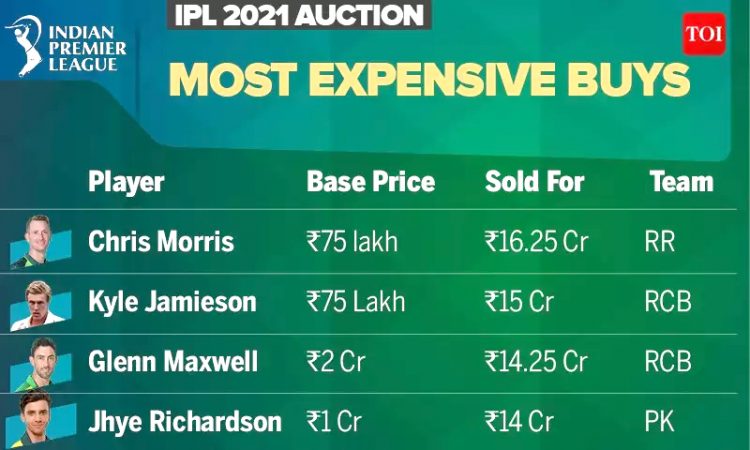 Chennai, February 18: South African all-rounder Chris Morris and India uncapped player Krishnappa Gowtham were the biggest talking points at the IPL 2021 Players Auction in Chennai on Thursday. While Morris became the most expensive player ever in the history of Indian Premier League auction with a price tag of INR 16.25 crore, Gowtham became the highest uncapped Indian buy ever (INR 9.25 crore) at the auction table.

Rajasthan Royals went all-out for the South African all-rounder Morris, buying him for a whopping INR 16.25 crore.
With a base price of just INR 75 lakh, Morris invited a big battle that saw Mumbai Indians, Royal Challengers Bangalore, Punjab Kings and the Royals fighting for the Proteas. The pink brigade eventually got the 33-year-old for the highest ever amount at the IPL auction, surpassing Yuvraj Singh’s record of INR 16 crore in 2015.
Gowtham, on the hand, who was released by Punjab Kings after just one year with the franchise, became the highest Indian buy at the table. The all-rounder was bought by Chennai Super Kings after an intense bidding war for a whopping 9.25 crore.
Kiwi pacer Kyle Jamieson was another big name at the auction table as he attracted the second highest bidding amount after Morris, going to Royal Challengers Bangalore for INR 15 crore. The lanky pacer had a base price of 75 lakh.
Out of the total 61 available slots, 57 were eventually filled with 22 foreigners and 35 Indians (29 uncapped). Arjun Tendulkar, son of legendary Sachin Tendulkar, wrapped up the bidding process after being bought by MI for the base price of INR 20 lakh.
Test specialist Cheteshwar Pujara also finally got a buyer and will be seen in action in this year’s IPL. Pujara was bought by CSK for his base price of INR 50 lakh.
Another uncapped player Shahrukh Khan, who had a scintillating Syed Mushtaq Ali trophy campaign also grabbed big bucks and was bought by Punjab for INR 5.25 crore.
Earlier, all-rounder Glenn Maxwell also hit the jackpot as RCB snapped up the Aussie for a whopping INR 14.25 crore at the bidding table. With a base price of INR 2 crore, Maxwell started a three-way bidding war that saw Kolkata Knight Riders, RCB and CSK fighting for him. KKR backed off mid-way but the intense battle between RCB and CSK continued. The Chennai franchise eventually backed off after his price crossed the 14 crore-mark.
Bought by the Punjab Kings for INR 10.75 crore and then released after the season, it was a big pay day for Maxwell. RCB, who had a total purse of INR 34.5 crore before the auction, spent over a third of their money for Maxwell.
Off-spinner Harbhajan Singh and all-rounder Kedar Jadhav, who did not attract any buyers in the first round of bidding were later bought by KKR and SRH respectively for their base prices of INR 2 crore.
Rajasthan also got hold of India all-rounder Shivam Dube for INR 4.4 crore. (base price 50 lakh) while English pacer Tom Curran went to the the Delhi Capitals for INR 5.25 crore (base price 1.5 crores)
All-rounder Moeen Ali (base price 2 crore) too bagged a big chunk at the table after CSK bought the Englishman for INR 7 crore. Aussie all-rounder Riley Meredith was also in the spotlight at the table as PK bought him for a whopping INR 8 crore from his base price of just INR 40 lakh.
KKR made their first buy of the day in the form of Shakib Al Hasan, who was bought for INR 3.2 crore by the Shahrukh Khan-owned franchise. Shakib did not feature in the last edition of the IPL.
Veteran Australian all-rounder Dan Christian also got a buyer in RCB as they got him on board for for INR 4.8 crore. His base price was 75 lakh. Pacer Adam Milne too ended up with a big cheque of INR 3.2 crore and was bought by MI.
Earlier, star batsman Steve Smith got the ball rolling at the auctions after he was snapped up by Delhi Capitals for the first buy of the day. After a slow start that saw Karun Nair, Alex Hales and Jason Roy going unsold, Smith was bought by DC for a price tag of INR 2.2 crore.
Bangladesh’s Mustafizur Rahman and current world no.1 T20I batsman David Malan were bought for their base prices of 1 crore and 1.5 crores by RR and Punjab Kings respectively.
Among the other Indian uncapped players KC Cariappa, M Siddharth, Mohd. Azharuddeen, Vishnu Vinod and Sachin Baby were sold at their base prices. (Courtesy: ToI)