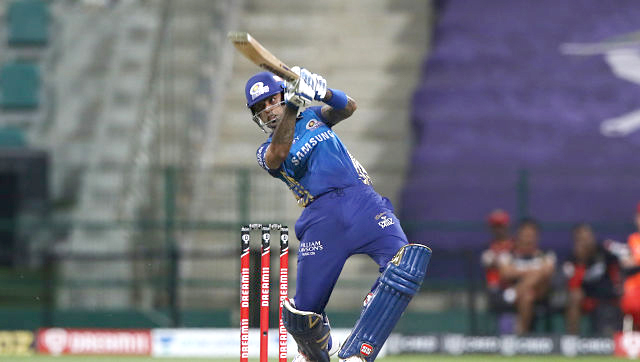 Abu Dhabi, October 29: Suryakumar Yadav made a statement with an unbeaten 43-ball 79 as Mumbai Indians put one foot in the play-offs following their five-wicket victory over Royals Challengers Bangalore in an IPL match here on Wednesday.
Not considered for the tour of Australia despite his consistent run in domestic cricket and IPL, Suryakumar led MI’s chase of 165 and helped the defending champions reach the target with five balls to spare.
Earlier, Jaspirit Bumrah (3/14) was his usual devastating self in the death overs as MI pulled things back to restrict RCB to 164 for six.
During the game, Bumrah picked up his 100th IPL wicket in the form of RCB captain Virat Kohli, who, incidentally, also was his first scalp in the lucrative event.
The win meant that Mumbai Indians continued to top the table with 16 points. With another two games left, they are all but through to the play-offs.
The second half belonged to Surya, who plundered 10 fours and 3 sixes, and he not only took the team out of trouble after early jitters, but also took them home.
Hardik Pandya (17) played a useful cameo.
MI were in spot of bother at 72 for three, having lost openers Ishan Kishan (25), Quinton De Kock (18) and Saurabh Tiwary (5) cheaply.
But that did not deter Surya, who initially upped the ante in the 10th over, hammering a six and four off Yuzvendra Chahal (2-37).
Surya and Krunal Pandya (10) collected 13 runs off the 12th over and then he took on Dale Steyn, hitting him for three fours.
A determined Surya kept playing shots at will and hammered three boundaries in the 16th over as the equation came down to 35 runs from 24 balls.
He played round the park and fittingly finished the game with a boundary.
Earlier, Devdutt Padikkal pummelled the Mumbai attack into submission with a 45-ball 74.
Put in to bat, Padikkal, who smashed 12 fours and a six, added 71 runs for the opening wicket with Josh Philippe (33).
However, the RCB then suffered a middle-order collapse as Mumbai roared back into the game with lead pacer Bumrah doing the bulk of damage.
Padikkal began with a boundary over deep extra cover and then struck successive fours off Krunal Pandya, as RCB fetched 12 runs in the third over.
The two openers continued playing their shots, the highlight being Philippe’s six over Trent Boult’s head in the fifth over.
Padikkal then went on the offensive against James Pattinson, collecting two fours, as RCB raced to 54 for no loss in six overs.
However, leg-spinner Rahul Chahar (1/43) pulled things back for Mumbai, removing Philippe, who was stumped by Quinton De Kock.
Padikkal, who hit another two boundaries off Chahar, completed his fifty with another four.
Skipper Virat Kohli (9) perished early as RCB slipped to 95/2, but Padikkal continued his onslaught against Chahar, hammering a six and two fours, as RCB got 16 runs in the 15th over.
Mumbai then took four wickets in quick succession, removing AB De Villiers (15), Shivam Dube (2), Padikkal and Chris Morris (4), as RCB slumped to 138/6.
Gurkeerat Mann made a quick 14 but Mumbai Indians, known for their effectiveness in the death, allowed RCB only 35 runs in the last five overs. (PTI)