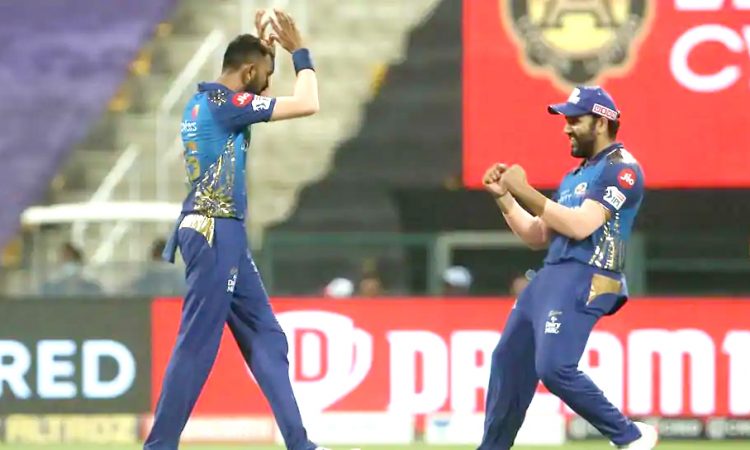 Abu Dhabi, October 2: Skipper Rohit Sharma smashed a half-century before the bowlers came to the fore to help Mumbai Indians thrash Kings XI Punjab by 48 runs in Match 13 of the 2020 edition of the Indian Premier League (IPL) at Sheikh Zayed Cricket Stadium in Abu Dhabi on Thursday.
The KL Rahul-led Kings XI Punjab won the toss and asked Mumbai Indians to bat first.
The defending champions lost their opener Quinton de Kock for a duck off a Sheldon Cottrell delivery in the very first over.
Rohit then smashed a crucial half-century besides stitching a crucial 62-run stand with Ishan Kishan (28) for the third wicket.
The Mumbai Indians opener eventually departed for 45-ball 70, which was decorated with eight boundaries and three sixes.En route to his knock, Rohit also completed 5,000 runs in the IPL to become only the third batsman after Royal Challengers Banglore skipper Virat Kohli and Chennai Super Kings star batsman Suresh Raina to achieve the feat.
Subsequently, Kieron Pollard (47) and Hardik Pandya (30) stitched a 67-run partnership for the fifth wicket to guide Mumbai Indians to a decent score of 191 for four.
In reply, Jaspit Bumrah,Rahul Chahar and James Pattinson bagged two wickets, while Trent Boult and Krunal Pandya chipped in with a wicket each to help Mumbai Indians restrict Kings XI Punjab to a score of 143 for eight inside 20 overs.
Nicholas Pooran was the highest scorer for the KL Rahul-led side with 27-ball 44, followed by opener Mayank Agarwal’s 25.
Pollard was declared ‘Man of the Match’ for his unbeaten knock of 20-ball 47 runs.
Mumbai Indians will next take on Sunrisers Hyderabad , while King XI Punjab will lock horns with three-time winners Chennai Super Kings (CSK) on the double header which will take place on October 4. (Agencies)