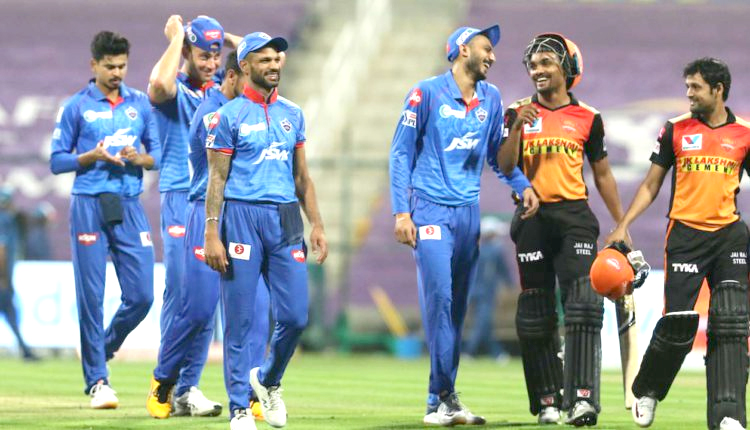 Abu Dhabi , November 9: After opener Shikhar Dhawan shone with the bat, Kagiso Rabada claimed an economical four-wicket haul to help Delhi Capital seal a 17-run win over Sunrisers Hyderabad in the all-important Qualifier 2 of the 2020 Indian Premier League (IPL) and book their place in the final of the tournament at the Sheikh Zayed Cricket Stadium in Abu Dhabi on Sunday.
With the victory, the Shreyas Iyer-led side has now set up their clash against four-time winners and defending champions Mumbai Indians in the summit showdown at the Dubai International Stadium on Tuesday. Meanwhile, Sunrisers’ campaign at the 13th season of the lucrative T20 tournament has come to an end.
It was Delhi Capitals who won the toss and elected to bat first during the crucial clash.
Openers Shikhar Dhawan and Marcus Stoinis provided a perfect start to their side by sharing a good 86-run partnership for the first wicket before the latter was departed for 27-ball 38 runs on a Rashid Khan delivery.
Subsequently, Dhawan notched up his sixth IPL half-century of the season off just 26 deliveries besides also bringing up 40-run and 52-run stands with skipper Shreyas Iyer (21) and Shimron Hetmyer (unbeaten at 42), respectively to help Delhi post a good total of 189 for three.
Dhawan eventually finished his innings at 50-ball 78 runs, which was decorated with six boundaries and two maximums.
For Sunrisers Hyderabad, Sandeep Sharma, Jason Holder and Rashid Khan chipped in with a wicket each.
In reply, SRH lost their opening three wickets of Priyam Garg (17), skipper David Warner (2) and Manish Pandey (21) inside the Powerplay.
Kane Williamson then brought up a crucial knock of 67 runs off just 45 balls besides sharing a 57-run partnership with Abdul Samad (33) for the fifth wicket to help Sunrisers cross the 140-run mark.
Needing 30 runs off 12 balls, Kagiso Rabada removed Samad, Rashid Khan (11) and Shreevats Goswami (0) in the penultimate over to help Delhi Capitals restrict Sunrisers Hyderabad to a score of 172 for eight in their stipulated 20 overs and move to their maiden final.
Rabada proved to be a tormentor-in-chief for Delhi with his brilliant figures of four for 29. He was followed by Marcus Stoinis, who also finished with impressive figures of three for 26.
Meanwhile, Axar Patel also added a wicket to his account. (Agencies)
Stoinis was declared ‘Man of the Match’ for his notable contributions with both bat and ball.
Brief scores: DC 189/3 in 20 overs (Shikhar Dhawan 78, Shimron Hetmyer 42 not out; Rashid Khan 1/26) vs SRH 172/8 in 20 overs (Kane Williamson 62, Abdul Samad 33; Kagiso Rabada 4/29)