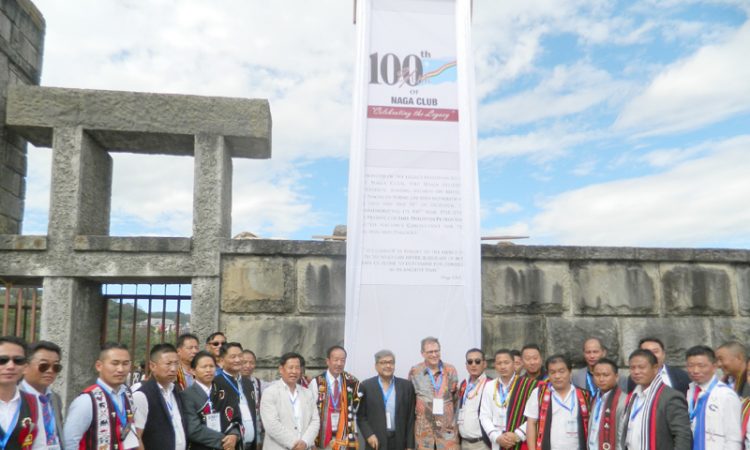 Kohima, October 31: On the sideline of the celebrations of 100th year of Naga Club at Jotsoma on October 30, and Naga Solidarity Park on Wednesday, international observers have cautioned of serious backlash due to divisions in the community.
United Nations Consultant for Peace Building and Dialogue, Philippus Petrus Visser who was an honoured guest in today programme organised by the Naga Students’ Federation (NSF) at Naga Solidarity Park here said seed of difference would bear the fruit of divisions which would try to shape the society, adding that people should not underestimate the power of divisions that can change the course of the community.
Philippus, who is from South Africa and worked with the people of South Sudan, said to flock the communities is not an easy task but extremely important to reach for a solution. He said the most risky period is during transition period when greed, jealousy and hunger for power would emerge.
“Transition period is very dangerous for the communities,” he said. He was referring to civil war in South Sudan after it achieved independence in 2011.
Citing an example how colonial power had sowed divisions among communities in South Africa and exploited them, the UN Consultant said Nelson Mandela fought for African nationalism to overcome divisions which was sowed by the colonial power. He said African National Congress (ANC) fought for ideology of disunity and divisions to fight for the rights of the African people. “National liberation was a common goal of South African nationalism,” he said.
Appreciating the theme “Celebrating the legacy”, Pilippus said the theme has vibrated with power. He said a memorandum to the Simon Commission by the Naga Club was a notion of unity, adding that unity is imperative for political liberation. He said the memorandum speaks of togetherness and unity among the Naga people.
He further said for any political movement relationship between the leadership and the communities is important as they are interdependent in all aspects. He said disunity and divisions among the communities will lead to distrust and hatred which would take time to heal.
The UN Consultant asked Naga people to cast their mind 100 years forward while acknowledging the legacy of the 100 years back.
Former Secretary General, South Asia Program for Human Rights (SAFHR), Tapan Bose attributed the Government of India for disunity and division in Naga society. He said New Delhi has been constantly harping on unity of the Nagas, but inside it has succeeded in dividing the Naga people.
“It is the ploy of the State to create more crisis in the process,” he added. He said the Government of India has given a fake debate on unity of Naga people.
Bose said while there has been tremendous support to the 20 years old Naga peace process, the Government of India was trying to undermine the peace process and support of the people.
While asserting that Naga people’s movement for self-determination was genuine, the human rights activist said New Delhi has applied a constitutional colonialism to suppress the Naga movement. But he lauded the decisions of the Union Government and the NSCN for adopt a paradigm shift from war like situation to a political dialogue.
Bose insisted that the negotiating parties should create a system where all Nagas could live together. He said there has been positive indication for a solution after signing the Framework Agreement on August 3, 2015 between the Government and the NSCN (Isak-Muivah), adding the framework was proposed by the NSCN in 2009.
The human rights activist said the parties are working out on legal system to have a relationship between the two entities, whereby additional chapter will be added in the Indian Constitution to safeguard the rights and aspiration of the Naga people.
In today’s celebration, representatives from Northeast Students’ Organisation (NESO), Arunachal Pradesh Naga Students’ Federation (APNSF) and Kuki Inpi Nagaland delivered solidarity messages.
In his keynote address, Convenor, Organising Committee for the commemoration of the 100th Year of Naga Club, Neingulo Krome said despite many challenges Naga society is facing because of some unceasing internal contradictions, which continue to mar the society, the ancestors who laid the foundation of Naga nationhood must be looking at today’s gathering with affection as people equally embrace their blessings upon them.
“Today as we all join our hearts and souls to re-affirm the pledge of our ancestors, we re-iterate that the land of the Nagas straddles across the boundary lines which the British without consulting the Nagas drew to demarcate the territories of India and Burma. This imaginary lines runs through the middle of villages and even houses,” Krome said. He said Nagas were divided into the present states of Arunachal Pradesh, Assam, Manipur, Nagaland under India and erstwhile Sagaing Division and the recently formed self-administered zone in Burma, which leaves out Khamti, Homalin and Tamu and also with many Nagas living in Kachin State, as well as under Burma.
But he said cutting across national and international boundaries, Nagas have gathered at the Naga Solidarity Park representing all geographical regions in manifestation of what their ancestors and pioneers of the Naga Club stood for since 100 years ago and that would be so for all times to come.
The day was marked by folk dance by Mukery tribe from Myanmar, folk songs by Western Rengmas from Assam, Chakhesang Cultural Research Institute, Chethaba and Eirene Choir by Kohima Ao Baptist Church. Virokono Kuotsu read out a political poem and enactment of atrocities by the Indian army by Southern Nagas.
Traditional blessing was evoked by ex-Chairman Japfuphiki Pfutsana Krotho. A minute of silence was also observed in honour of the departed members of Naga Club.
Earlier Philipphus unveiled the monolith at the entrance of the Naga Solidarity Park.
Over 3000 people from all corners of Naga inhabited areas attended the celebrations.
The celebration was also attended by former NSF president and now MLA, Y. Vikheho Swu, former MLAs, Takamasa Ao and Supongmeren, representatives from various Naga organisations, former NSF officials among others. (Page News Service)