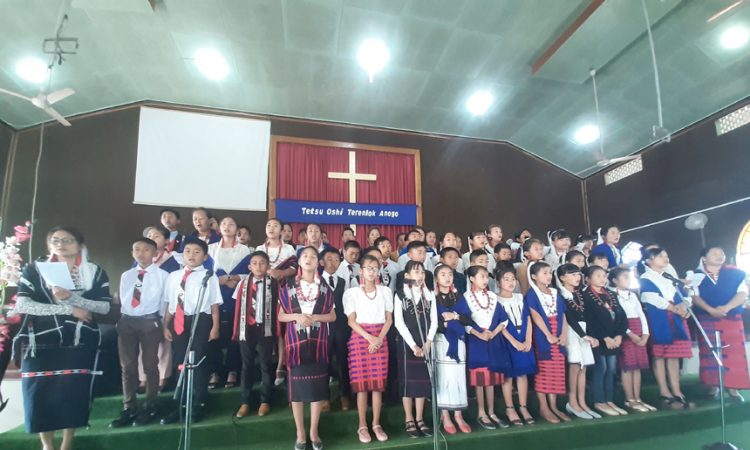 Chungtia (Mokokchung), February 21: As per the directive of the Ao Baptist Church Council (ABAM) to all its affiliates to commemorate the International Mother Language Day, the Child Education Department of Chungtia Baptist Church (CBC) held a special programme on Sunday with Aso Imsong, writer and general secretary of Ongpangkong Mungdang as the main speaker.

The programme was held on the theme ‘Tetsu oshi ajanga kin ka longjemdaktsur’ (A nation is unified by mother language). Hundreds of young children and youths, in their traditional dresses, from the Chungtia Baptist Church and also from the nearby Sabangya Baptist Church attended the special programme.
The main speaker, Aso Imsong, while speaking at the programme, stressed on the importance of mother language in the modern Naga society.
While appreciating the ABAM for giving much importance to promotion and preservation of the mother language, Imsong hoped that the commemoration of such an important day by the church would be the starting point towards the development of the Ao language in the days to come.
He said that the church has a very important role to play in promoting the native language as the church is one place where the mother language is intensively used to communicate to the congregation. Besides, he also pointed out that the church also involves in printing and publishing a lot of periodicals and magazines which is a great medium to preserve and encourage the usage of the mother language in the day to day life of the people.
Likewise, he also encouraged the village councils and the student unions to encourage the youngsters to learn the proper Ao vocabulary, speak frequently in the mother language, and also try to write in the vernacular language among the native speakers.
In this connection, Imsong regretted the fact that many of the youngsters, especially those living in the towns and cities, cannot speak and even feel ashamed to speak in their native tongue. He pointed out that if one forgets one’s mother language, then one would lose their identity as people.
“If you and I don’t speak, write and read the mother language, then who would?’ Imsong challenged the congregation. He also highlighted a misconception among the native speakers that the Ao language is very poor in vocabulary. In this regard, he said that the Ao language is never poor in vocabulary; it is only that the people are not aware or forgotten the many phrases and words due to disuse by the native speakers.
He asserted that it is the duty of the younger generation to research and write down the vocabularies, or even improvise on some Ao words, in order to make the Ao language richer which would enable the future Ao writers to produce more intellectual literatures in the Ao language.

Meanwhile, the programme was led by Walang while CBC Associate Pastor Youth, Kathyla invoked God’s blessings. Chungtia village council member, I. Wati Jamir and CBC Deacon L. Tali exhorted the congregation and highlighted on the importance of why the younger generation should not ignore the mother language.
Presentation of special cultural songs, a shot skit, narration of Ao poems folktales by the young children marked the programme which was also attended by a host of parents. The CBC Associate Pastor CED delivered the vote of thanks.
(Page News Service)