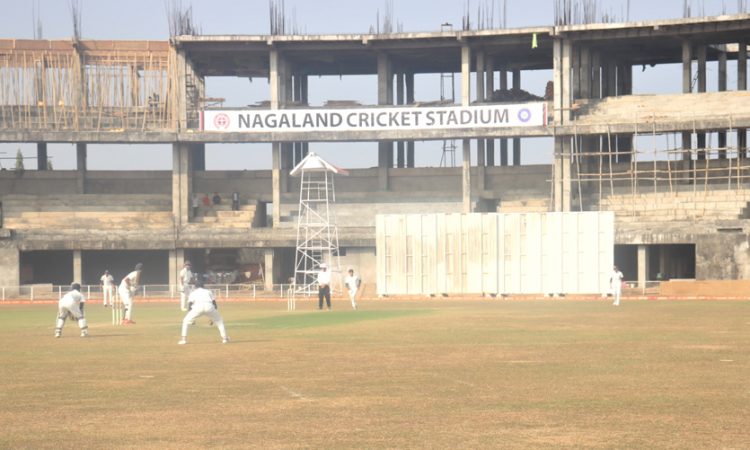 DIMAPUR, JANAURY 18: Dimapur defeated Mokokchung by a huge margin of 107 runs in the opening match of the 1st G Rio memorial U-19 (boys) inter-district tournament played at Nagaland Cricket Stadium, Sovima, Dimapur on Monday.
A press release from Nagaland Cricket Association (NCA) informed that Mokokchung won the toss and elected to bowl first.

Powered by Sujal Prasad’s 54 and 50 by Monu Kumar, Dimapur compiled 186 runs for the loss of 7 wickets in the allotted 25 overs.
For Mokokchung, Odilemba, Purtongzuk and Nripen claimed 2 wickets each.
The chase ended in 19.2 overs as Mokokchung were bowled out for 79 runs. Mughavi top-scored with 34 runs. Raja Sha, with 4 wickets, was the pick of the bowlers for Dimapur.
In the second match, Kohima inflicted a 22-run defeat on Tuensang. After winning the toss, Kohima batted first and were bowled out for 139 in 22.1 overs.
Seyievizo scored 51 runs, while Samuel Zaputou contributed 16.
In reply, Tuensang could muster only 117 before being bowled out in 19.5 overs.
The NCA has recently tied up with CricHeroes, an Ahmedabad-based company, as the official online scoring partner for all the tournaments organised by the association.
Live score updates of the ongoing tournament will be available in their official website- cricheroes.in or crickheroes app. (Page News Service)