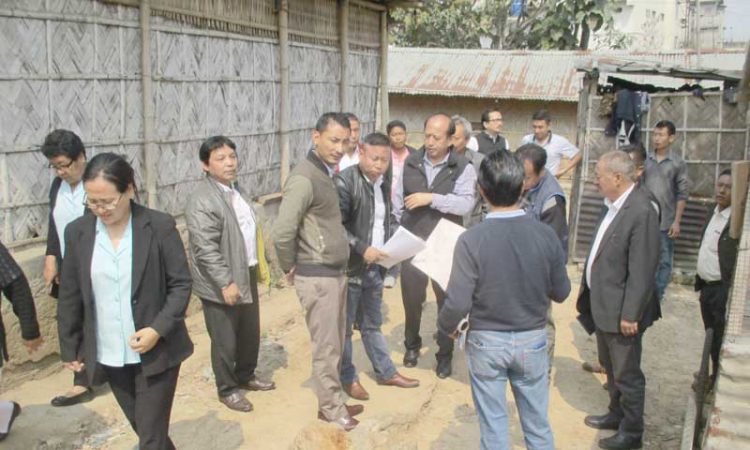 Dimapur, March 5: A team comprising of different individuals representing different departments and parties, comprising of Medical Superintendent, Dimapur, Dr. Z Kheshito Zhimo, EAC (Rev) Tsidi, LSRO Dimapur and others, on Tuesday carried out an inspection of the land area under the District Hospital Dimapur, which has been for long a centre of controversies because of disputed ownerships.
During the inspection, done primarily to verify the occupants settled on the lands that fall under the District Hospital legally, the team could verify 15 of the 18 occupants named as patta holders, while the verification of three could not be done.
It needs to be mentioned that of the 18, the cases of the 9 patta holders are in court, while the other 9 will be directed to produce their documents in the days to come.
The inspection was the consequence of a status report submitted by the hospital authority on October 20 last to the Chief Minister regarding the encroachment of the hospital land by private parties.
In October last year, Minister of Health and Family Welfare S. Pangnyu Phom had hit out against people who allegedly encroached upon land belonging to the district hospital and had warned of measures.
Interestingly, many of the occupants, encroacher or not, are staffs or retired staffs of the hospital and over the years the number of people claiming to have a patta has only increased much to the dismay of the hospital authority.
Legally, the land of the hospital spreads over an area of 55, 198 sqm. (Page News Service)