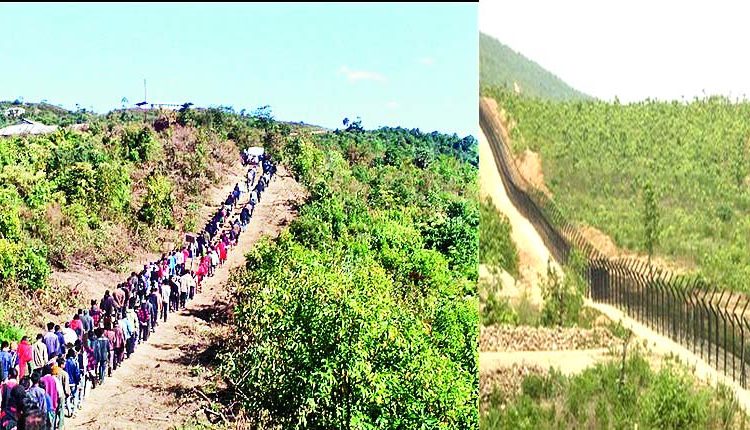 Kohima, January 18: Divided by borders but bonded by blood, Khiamniungan tribe settled in India and Myanmar have vowed to resist any force which is detrimental to the tribe.
But the Government of India wants to erect a fence along the border with Myanmar solely with the intention to check to and fro movement of Indian militants who are taking shelters in Myanmar, mostly in Saigang Division.
“The intention of the Government of India to erect fence along the border is to check movement of militants,” said Khiamniungam Tribal Council (KTC) President, L. Ngon. He said after the abrogation of ceasefire by the National Socialist Council of Nagaland (Khaplang), the Government of India came up with the plan to fence the Indo-Myanmar border.
But Ngon said such intention of New Delhi will be gross violation of human rights. He said KTC will oppose such plan, even as the Centre has kept it in abeyance after much opposition from several quarters, including the State Government. “How can they divide us,” the KTC President asked, adding majority of the Khiamniungan people are living inside Myanmar.
Even for the people of Pangsha most of their cultivable lands are inside Myanmar. “Where will they go for cultivation if Government of India fences the border,” the KTC President asked.
The fencing had begun in 2017 from border pillars 145 to 146 at Pangsha village under Noklak subdivision but due to strong opposition from various Naga organizations the Centre suspended the work for the time being.
Over the years the Union Government has been asking Myanmar to smoke out northeast militants from their soil, which was hardly heeded.
The KTC President said although the Government of India has stopped fencing, border security has been beefed up along the boundaries checking and scanning the movement of people. Lately, the Centre has deployed a company of Assam Rifles at Dan International Trade Centre, Pangsha.
Ngon said the proposal to fence the border was not the idea of Myanmar but Government of India. Fencing of the borders would also affect students from Myanmar who comes to the Indian side for education. There are many Myanmar citizens who are settled in Noklak town as well.
The Khiamniungans are a transnational tribe inhabiting mountainous geographies across northwestern Myanmar and northeastern India. There are around 150 villages in Myanmar, while in India side there are about 45 villages. Most of the Khiamniungan in Myanmar are now Baptist Christians. Every five years Khiamniungan Christians from both countries congregate. But still they wanted to live as one people, and above all as Naga, and for which KTC is bridging the gap.
“KTC covers entire Khaimniungan people living in India and Myanmar,” Ngon said. He said KTC is an apex body of Khiamniungan tribe and would continue to be. He said unlike other Naga tribes, KTC deals with two countries in all issues related with the Khiamniungan tribe. “We are dealing with two countries,” he said.
The Khiamniungans are by tradition known as fierce warriors for taking heads of the opponents in tribal warfare. The tribe is often neglected in the greater Naga political discourses of India and Myanmar due to their remote location and marginalization. Khiamniungan traders and villagers from Myanmar side cross over to India and travel to Noklak town to procure daily essential commodities such as groceries, clothes and rice. The town of Noklak, by virtue of being located near the border, sees a flow of varied commodities, material cultures, and ideas from both sides of the border and works as a site of interaction between India and Myanmar.
Pangsha, which is around 20 km from Noklak town, has become the main border crossing. In Noklak, villagers use Kenbo KB125, an underbone motorcycle manufactured from Yinxiang Motorcycle Manufacturing Co. Ltd in Yunnan in China and smuggled to the area by illegal means in the absence of a legal cross-border trade mechanism. People could travel deep inside Myanmar by motorcycles.
“We can reach Khamti and other Naga towns by motorcycles,” says KTC President, Ngon.
There are 10 Naga tribes in Myanmar namely Tangshang, Konyak, Makury, Somra Tangkhul, Lainong, Lamkang, Moyon, Anal, Para, Khiamniungan.
KTC which is now more focused on development of Khiamniungan areas in the two countries, has convened a general meeting from February 27 near Khamti town where several hundreds of people from both countries are expected to attend. “We will discuss several issues confronting our people and for development,” Ngon said.
The meeting is expected to discuss about proposed border fencing by the Government of India, and also to urge the Myanmar government for speedy development of Naga self-administration zone. At least one Member of Parliament (MP) will attend the meeting as special guest. There are also two Khaimniungan MLAs in Myanmar. (Page News Service)