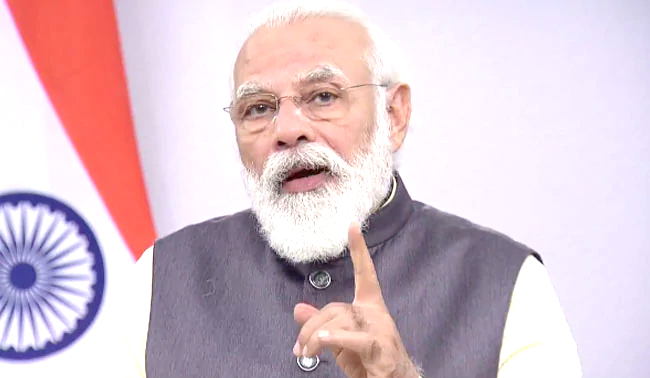 New Delhi, August 27: Prime Minister Narendra Modi said on Thursday that his government’s resolve for ‘Aatmanirbhar Bharat’ is not inward-looking, but aimed at boosting India’s capabilities and global peace, and also for helping the world economy become more stable.
Speaking at a defence industry outreach seminar, Modi said India’s self-reliance on defence capabilities will boost its standing of being a net security provider in the Indian Ocean and make it a defence supplier for many friendly countries, depending on strategic ties.
Wooing private players, he asserted that the import embargo on a number of defence equipment is not only aimed at curbing imports but also giving a boost to the domestic industry. He said more items will be added to this import embargo list later.
He noted that India has long been one of the biggest defence importers in the world and rued that enough attention was not paid to augmenting domestic production in the past despite the country having inherited a capable ecosystem at the time of Independence.
Asserting that a new mindset has emerged on his government’s watch, he said it is working to boost domestic manufacturing and developing new technologies with the maximum role for the private sector.
His government has opened the way for 74% FDI (Foreign Direct Investment) in defence production through automatic route, he noted.
Referring to recent labour reforms in a number of states, Modi said the reform exercise is not going to stop.
The work on building defence corridor is also on at a rapid pace in states of Uttar Pradesh and Tamil Nadu, he said, while adding that Rs 20,000 crore investment would be made for this in the next five years.
Modi said his government has always worked to remove red-tape and roll out red carpet for the private sector, while asserting that it is a win-win situation for everyone. (PTI)