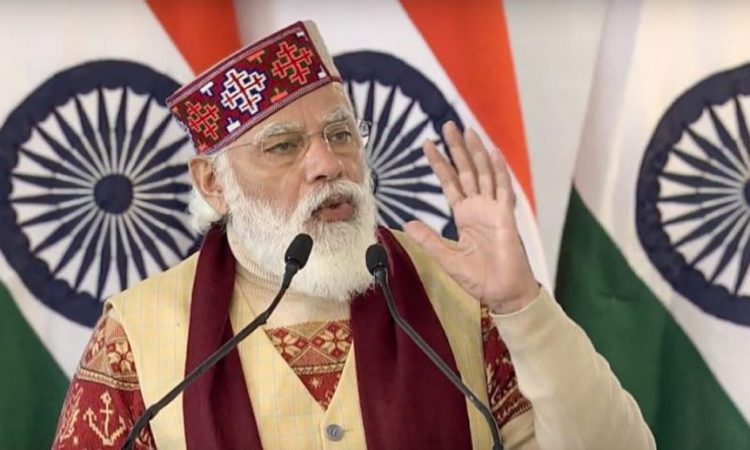 Rohtang/Sissu/Solang Valley (HP), October 3: Attacking the Congress, Prime Minister Narendra Modi on Saturday said the country’s defence interests were compromised for a long time as their governments kept “playing around with files” and delayed procurement of fighter jets, arms, ammunition and other strategic equipment.
Addressing public meetings in Himachal Pradesh after inaugurating strategically-important Atal Tunnel, the prime minister also took a swipe at the opposition’s protest against farm and labour laws, saying those parties also had similar ideas but lacked the courage to implement these measures because they focussed on elections while his government looked at the country’s and farmers’ welfare.
“Nothing is more important for us than the defence of the country. But for a long time, the country has also witnessed an era when the defence interests of the country were compromised. The Air Force of the country kept demanding a modern fighter plane, while they kept opening and closing files after files, and kept playing around with those files,” he said at Rohtang after inaugurating the tunnel.
Modi’s reference assumes significance in the wake of the government’s repeated assertion that the UPA regime had delayed decisions on the acquisition of Rafale fighter jets from France.
“Be it ammunition, modern rifles, bulletproof jackets, equipment that are used in cold weather conditions, everything was kept in abeyance. There was a time when the strength of our ordnance factories would make many jitters, but the country’s ordnance factories were left on their own,” he said after inaugurating the 9.02-km tunnel, which reduces the travel distance between Manali and Leh by 46 km and the travel time by four to five hours.
It has been billed as the world’s longest highway tunnel, connecting Manali and Leh and built at a cost of over Rs 3,000 crore.
Hitting out at the Congress, which headed the coalition government at the Centre during 2004-14, Modi cited a number of strategically important projects, from Atal Tunnel to the airstrip at Daulat Beg Oldi in Ladakh and Tejas fighter aircraft production, to assert that they were delayed or almost forgotten.
A world-class organization like the Hindustan Aeronautics Limited was created for indigenous fighter aircraft, helicopters, but attention was not given to strengthen it, he said.
The selfishness of people who had been in power for years prevented our military capabilities from being strengthened, Modi said. He questioned as to what “compulsion” and “pressure” might have been behind the delay in projects, without directly naming the Congress.
His government, the prime minister said, has deployed all its strength to develop border infrastructure, adding that never before has work been done at such a big scale, be it building roads, bridges, or tunnels.
For long, he said, border projects could never come out of the planning stage and those which did got stuck or were kept on the back burner and neglected.
The then prime minister Atal Bihari Vajpayee had inaugurated the approach road to Atal Tunnel in 2002, but the project was almost forgotten after his government was gone, Modi said, targeting the Congress-led UPA dispensation.
Work on only 1,300 meters was completed by 2013-14, he noted, adding that the project would have been completed by 2040 by this pace before his government took charge in 2014 and speeded it up at an unprecedented rate.
“Our govt increased the pace of construction from 300 meters/year to 1400 meters/year and completed the project in 2020,” Modi said. In just six years the government completed the work of 26 years, he said.
He said that according to a 2005 assessment, the tunnel would have been ready in about nine and a half crore rupees but due to continuous delays, today it has taken about Rs 3200 crore.
Just like the Atal Tunnel, this treatment was meted out to several such projects, the prime minister said, adding that Daulat Beg Oldi airstrip remained closed for four to five decades.
“There was no political will. I can talk about dozens of projects that are important from the strategic point of view, but for years they were neglected,” he said, hitting out at the previous Congress-led governments.
In this context, he also referred to the Kosi mega-bridge in Bihar which was envisaged by the Vajpayee government and inaugurated by him last month.(PTI)