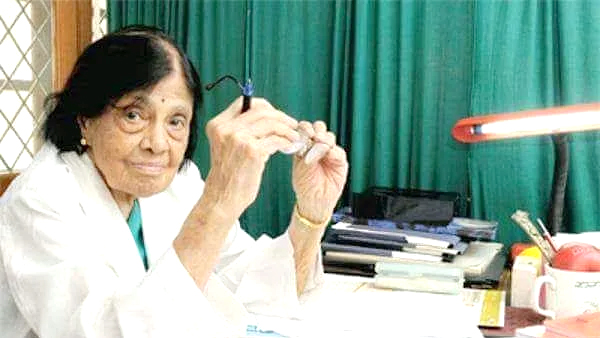 NEW DELHI, AUGUST 31: India’s first woman Cardiologist S Padmavati, who drew scores of young doctors into her speciality, introduced the country’s first super-specialisation cardiology course, coronary care unit and mobile coronary care van and amazed her colleagues by swimming well into her 90s, died from COVID-19 on Saturday. She was 103.
Sivaramakrishna Iyer Padmavati, described by some fellow Cardiologists as the “Godmother of Cardiology in India”, passed away after a 10-day battle with pneumonia caused by the new Coronavirus, her colleagues said.
Padmavati pioneered several aspects of coronary care services over more than 2 decades at the Government-run Lady Hardinge Medical College and Maulana Azad Medical College in New Delhi. She founded the National Heart Institute in 1982 to continue patient care and research.
She contributed to early research in India on coronary heart disease, rheumatic fever and high blood pressure, introduced a coronary catheterisation lab for diagnostic cardiology at Lady Hardinge in 1954 and launched coronary care services and a coronary care van at Maulana Azad in the late 1960s.
“Mobile coronary care vans are so common, almost mundane now, but she introduced this concept to India,” said OP Yadava, Chief Cardiac Surgeon at the National Heart Institute.
Padmavati was Director-Principal at Maulana Azad when Yadava joined the 1st-year MBBS course there.
“Many of the top Cardiologists in the country today were her students,” Yadava said.
Padmavati was born to a family of Barristers in Magwe, a small town in Myanmar, in 1917 and studied medicine at the Rangoon Medical School. She then left for England, where she acquired the Fellowship of the Royal College of Physicians of London and Edinburgh.
She continued her postgraduate training in Sweden and the US before returning to India. Rajkumari Amrit Kaur, the then Union Health Minister, appointed her a Lecturer at Lady Hardinge where she rose to become Professor and Head of Medicine.
The Government honoured her with the Padma Bhushan in 1967 and the Padma Vibhushan in 1992.
Colleagues on Sunday remembered her as a person of many facets ~ an aficionada of silk saris and solitaire diamonds who relished a glass of port every evening and continued to swim into her early 90s.
“During one of her swims at age 88 she suffered a heart attack – someone noticed that she wasn’t swimming properly,” Yadava said.
She was moved to the National Heart Institute where she underwent a bypass surgery. “Six months later, she began swimming again and continued till she was 93,” he said.
(Courtesy: TT)