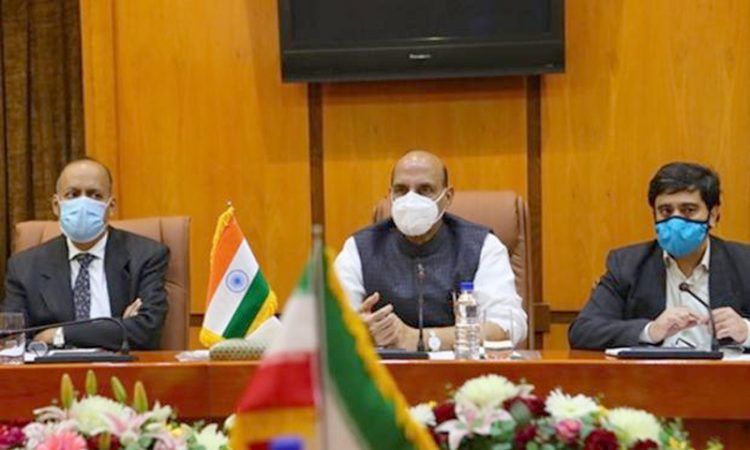 New Delhi, October 28: Hailing the Indian Army’s actions in “truly” protecting the integrity and sovereignty of the country, Defence Minister Rajnath Singh on Wednesday said that while the troops are standing firm in eastern Ladakh, the ongoing talks for peaceful resolution of the crisis will continue.
In an address to the top commanders of the Army, the defence minister described the Army as one of the “most trusted and inspiring” organisations in the country and said it is a national responsibility to provide the best weapons, equipment and clothing to the troops braving extreme weather and hostile forces to defend India’s territorial integrity.
Nearly 50,000 Indian Army troops are currently deployed in a high state of combat readiness in various mountainous locations in eastern Ladakh in sub-zero conditions as multiple rounds of talks between India and China have not yielded concrete outcome to resolve the row.
The defence minister also clearly asserted that there will be no budgetary constraints to enhance the capability of the Army and meeting its other requirements.
In a tweet after his address to the commanders, Singh said the government will leave no stone unturned to strengthen the “arms of our Armed forces” and that it is committed to facilitate reforms in the Army and help it achieve advantages in all areas.
“Addressed the Army Commanders’ Conference in New Delhi today. I’m extremely proud of the initiatives undertaken by the Indian Army in the current security environment,” he said.
The Army said the defence minister complimented the force for its high standard of operational preparedness and capabilities, which he experienced first-hand during his visits to forward areas.

Talking about reform initiatives to strengthen combat capabilities of the armed forces, Singh mentioned plans to roll out integrated battle groups, integrated theatre commands and integrated air defence commands, and called them “game-changers” in the way Indian armed forces will fight future wars.
In his address, Singh also paid tributes to the “bravehearts” of Galwan, Kashmir and the Northeast for making the ultimate sacrifice in the defence of the motherland, the Army said in a statement.
The defence minister, while commenting on the current situation along the northern borders, expressed confidence that while troops are standing firm, the ongoing talks for peaceful resolution of the crisis will continue, the Army said.
His comments came ahead of the eighth round of military talks between the two armies. The fresh round of talks is expected to take place in the next few days.
“It is our national responsibility to ensure availability of best weapons, equipment and clothing to our troops braving extreme weather and hostile forces to defend our territorial integrity,” the Army quoted Singh as saying.
The defence minister also reaffirmed the faith of the billion-plus citizens in the Indian Army as one of the “most trusted and inspiring” organisations in the country, the Army said in the statement.
In his address, Singh mentioned the stellar role played by the Army in guarding the country’s borders and fighting terrorism, apart from providing assistance to the civil administration whenever called for.
“Actions of Indian Army truly ensure the integrity and sovereignty of our great nation,” he said.
Referring to the situation along the border with Pakistan, the defence minister lauded the Army’s response to cross border terrorism and ceasefire violations and its excellent synergy with Central Armed Police Forces and police in tackling terrorism in Jammu and Kashmir.
“It is due to the synergised operations in the Valley that the Union Territory of Jammu and Kashmir is moving to a stable and peaceful environment conducive for overall growth and development,” he remarked.
The top Army commanders are carrying out a comprehensive review of India’s combat readiness along the Line of Actual Control with China as well as the situation in Jammu and Kashmir at the four-day conference that began on Monday.
The Army said its apex leadership is comprehensively deliberating upon all aspects of existing security scenarios, the situation along the borders and in the hinterland and challenges for the present security apparatus.
Also, the conference is focussing on issues of organisational restructuring, logistics, administration and human resource management.
In his remarks, Singh also described the creation of the post of Chief of Defence Staff and establishment of Department of Military Affairs as a “momentous decision” on the path of rolling out Integrated Battle Groups, Integrated Theatre Commands and Integrated Air Defence Commands.
He said the concept will be game-changers in the way Indian armed forces fight future wars

“These were a result of the decision by the prime minister to undertake decisive reforms for transformational change to improve operational capability,” Singh said.
He also alluded to the establishment of the Defence Cyber and Space Agencies which will enhance the kinetic potential of the forces, he said.
The government had appointed Gen Bipin Rawat as Chief of Defence Staff on December 31 to bring in convergence among the three services and restructure military commands to effectively deal with future security challenges.
The CDS is now planning to create theatre commands to help the armed forces prepare for future wars.
As per the plan, each of the theatre commands will have units of the Army, the Navy and the Air Force which will work as a single entity looking after security challenges in a specified geographical territory under an operational commander.
At present, the Army, Navy and the Air Force have separate commands.
The defence minister also said that the government is focused on enhancing combat capability and ensuring the welfare of soldiers.
He said that the Delegation of Financial Powers, Defence Procurement Manual and the Army headquarters restructuring proposals are currently under review and will be finalised soon.
“The announcement of Atmanirbhar Bharat (self-reliant India) and notification of negative list of imports are big steps towards self-reliance in defence which offer a great opportunity to the Indian defence industry to meet the future requirements of the Armed Forces,” he said.
On August 9, Defence Minister Rajnath Singh announced that India will stop the import of 101 weapons and military platforms like transport aircraft, light combat helicopters, conventional submarines, cruise missiles and sonar systems by 2024.
Subsequently, the defence ministry released the first list of items, with a detailed timeline, which will not be allowed to import. The decision was aimed at promoting the domestic defence industry.
The defence minister remarked that the decision to grant permanent commission to women in the Army is another significant step that will ensure equal opportunities for professional growth to all officers irrespective of their gender.
Singh also said that the government is committed to corporatise the Ordnance Factory Board (OFB) to enhance its efficiency and accountability.
He also assured the veteran community that all issues related to the ex-servicemen contributory health scheme (ECHS) will be addressed expeditiously.
“The recent decisions to enhance monetary assistance to next of kin of all categories of battle casualties from existing Rs 2 lakhs to Rs 8 lakhs granted under Army Battle Casualties Welfare Fund (ABCWF) and removal of minimum service clause for enhanced ordinary family pension are some of the major decisions taken to alleviate problems of our families,” he said.
Singh also complimented the efforts of the Border Roads Organisation for working under difficult conditions to connect far-flung areas. (PTI)