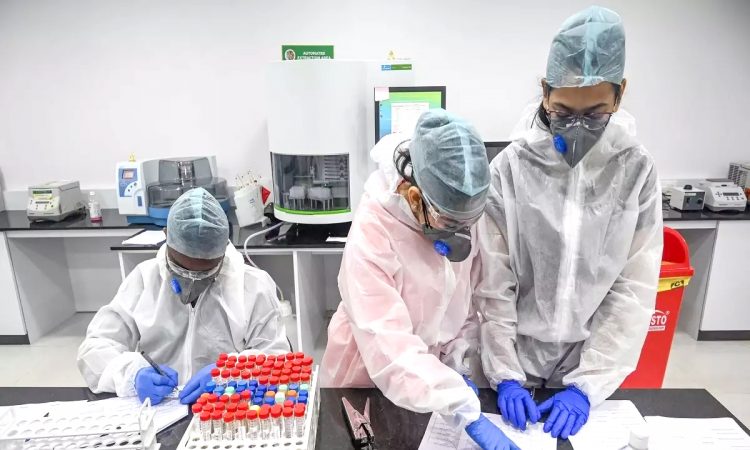 Bengaluru, November 10: Indian Institute of Science claimed on Tuesday that researchers led by Raghavan Varadarajan, Professor at IISc’s Molecular Biophysics Unit, are working towards developing effective vaccine strategies against two viruses: SARS-CoV-2 and HIV.
In two studies published in the past week, they reported the design of a “heat-tolerant” COVID-19 vaccine candidate and a rapid method to identify specific regions on the HIV envelope protein that are targeted by antibodies, which can help design effective vaccines, an IISc press release said.
The studies were published in the Journal of Biological Chemistry and the Proceedings of the National Academy of Sciences respectively, according to Bengaluru-based IISc.
The COVID-19 vaccine candidate contains a part of the spike protein of the novel coronavirus called the Receptor Binding Domain (RBD) – the region that helps the virus stick to the hosts cell.
It is being developed by Varadarajan’s lab in collaboration with Mynvax, a startup co-founded by him and incubated at IISc, as well as several other institutes.
“When tested in guinea pig models, the vaccine candidate triggered a strong immune response”, the statement said.
“Surprisingly, it also remained stable for a month at 37C, and freeze-dried versions could tolerate temperatures as high as 100C,” it said.
Such “warm” vaccines can be stored and transported without expensive cooling equipment to remote areas for mass vaccination – most vaccines need to be stored between 2-8C or even cooler temperatures to avoid losing their potency, the statement further said.
Compared to newer types such as mRNA vaccines, making a protein-based vaccine like this can also be scaled up easily in India where manufacturers have been making similar vaccines for decades, IISc said.
There is another difference between the vaccine candidate being developed by Mr Varadarajan’s team and many other COVID-19 vaccines in the works – it only uses a specific part of the RBD, a string of 200 amino acids, instead of the entire spike protein.
The team inserted genes coding for this part via a carrier DNA molecule called a plasmid, into mammalian cells, which then churned out copies of the RBD section.
They found that the RBD formulation was just as good as the full spike protein in triggering an immune response in guinea pigs, but much more stable at high temperatures for extended periods – the full spike protein quickly lost its activity at temperatures above 50C, according to the statement.
“Now we have to get funds to take this forward to clinical development”, Mr Varadarajan said.
This would include safety and toxicity studies in rats along with process development and GMP manufacture of a clinical trial batch, before they are tested in humans.
“Those studies can cost about Rs 10 crore. Unless the government funds us, we might not be able to take it forward”, he added.
The second study focused on HIV, the virus that causes AIDS, a disease for which there is no vaccine despite decades of research.
The team, which included researchers from multiple institutes, sought to pinpoint which parts of the HIV’s envelope protein are targeted by neutralising antibodies – the ones that actually block virus entry into cells, not just flag it for other immune cells to find.
According to the authors, vaccines based on these regions might induce a better immune response. To map such regions, researchers use methods like X-ray crystallography and cryoelectron microscopy, but these are time-consuming, complicated and expensive.
Therefore, Varadarajan and his team explored alternative approaches, and eventually arrived at a simpler, yet effective solution.
First, they mutated the virus so that an amino acid called cysteine would pop up in several places on the envelope protein. They then added a chemical label that would stick to these cysteine molecules, and finally, treated the virus with neutralising antibodies.
If the antibodies could not bind to crucial sites on the virus because they were blocked by the cysteine label, the virus could survive and cause infection.
Those sites were then identified by sequencing the genes of the surviving mutant viruses.
“This is a rapid way of figuring out where antibodies are binding and is useful for vaccine design,” says Mr Varadarajan.
It could also help in simultaneously testing how different person’s sera samples – the portions of their blood containing antibodies – react to the same vaccine candidate or virus, he said.
“In principle, researchers could adapt this methodology to any virus, including SARS-CoV-2”, he said. (PTI)