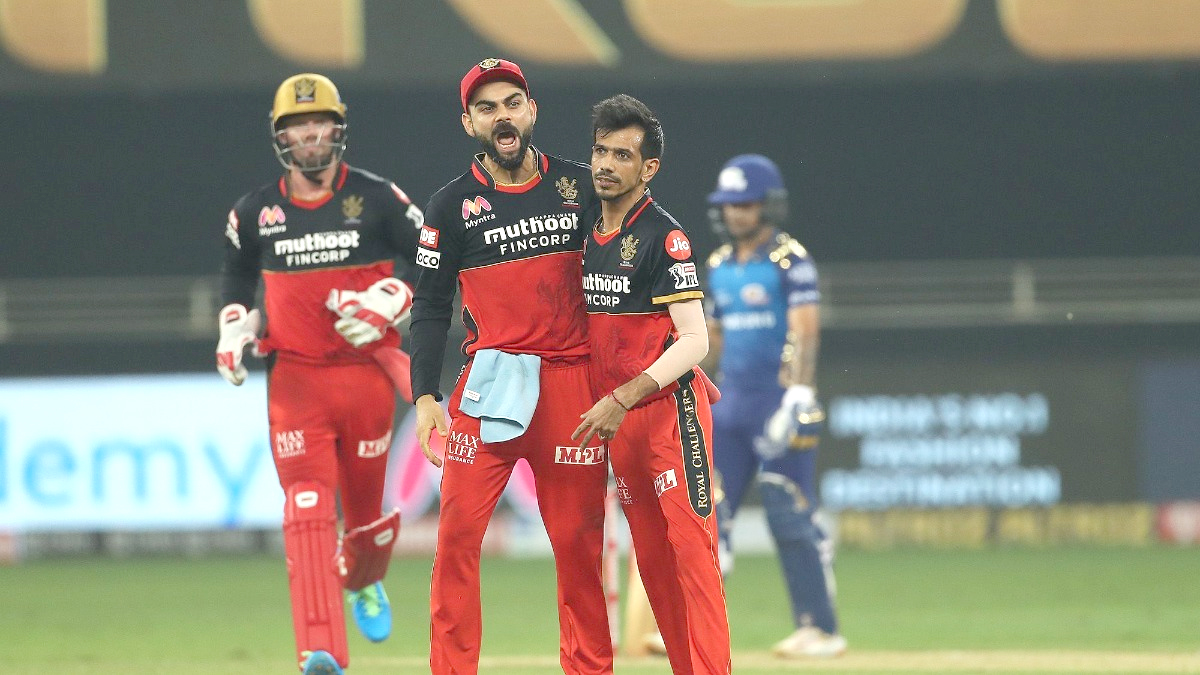 Dubai, September 29: Royal Challengers Bangalore defeated Mumbai Indians in a Super Over thriller on Monday (September 28) at the Dubai International Stadium.
Mumbai Indians who looked down and out at one stage tied RCB’s total of 201 thanks to phenomenal counter-attack from Ishan Kishan (99 off 58 balls; 4×2, 6×9) and Keiron Pollard (60 from 24 balls; 4×3, 6×5).
In the Super Over, Navdeep Saini was the hero for RCB, as he contained Mumbai to a paltry 7/1. Bumrah, in reply, brought his side close but with RCB needing 6 from 3 balls, Ab de Villiers top-edged one for four and Kohli hit the last ball for four to complete a memorable victory for his side.
Earlier, Mumbai Indians won the toss and opted to bowl first against Royal Challengers Bangalore.
Royal Challengers Bangalore posted a handsome total of 201/3 from their allotted 20 overs. Both openers Devdutt Padikkal and Aaron Finch scored brilliant fifties to provide a strong start to RCB with their 81-run stand. Mumbai Indians threatened to come back into the game strongly after the quick dismissals of Finch and skipper Virat Kohli. Kohli disappointed again as he was dismissed for a miserly 3 off 11 balls.
Ab de Villiers (55 off 24 balls; 4×4, 6×6) though had other plans as he scored a rapid half-century to power his side over 200. He was given good company in the end by all-rounder Shivam Dube (27 off 10 balls; 4×1, 6×3).
RCB scored 65 runs off the final four overs, where the Mumbai bowlers were put to the sword. Bumrah’s final two overs went for 35 runs as Mumbai’s pace spearhead failed to nail in those trademark yorkers.
Chasing the mammoth 201, Mumbai lost skipper Rohit Sharma in just the second over. Mumbai looked done and dusted with the score reading 39/3 in the seventh over.
Hardik Pandya (15 off 13; 6×1) and Ishan Kishan then stitched a small stand but the run-rate kept surging. After Pandya’s dismissal, the Windies powerhouse Keiron Pollard came to the crease but initially, he failed to get going.
With the result of the match looking like a foregone conclusion, the duo started swinging their arms with Pollard, especially taking a liking towards RCB’s leg-spin duo of Yuzvendra Chahal and Adam Zampa. The Mumbai duo scored 49 runs from the 17th and 18th overs, delivered by the two leggies.
With 19 needed from the final six balls, Kishan hit two consecutive sixes off Udana with 5 needed from the final two balls. The youngster was dismissed on the penultimate ball but Pollard pulled away the final delivery for four to take the match into the one over-eliminator.
Ab de Villiers was handed the man of the match award for his frantic knock at the death.
RCB will take the victory in their stride after they were destroyed by Kings XI in their last game. Kohli’s poor run with the bat though, is a cause for concern. The Indian captain has scored a cumulative 18 runs from his three innings.
Mumbai despite the loss, still will look at the positives from the game. Ishan Kishan, still only 22, looks like a solid future prospect. Brought into the side to replace an unfit Saurabh Tiwary, the youngster grabbed the chance with both hands and was unfortunate to miss out on a well deserved century.
The wicketkeeper-batsman can replace an out of form Quinton de Kock in Mumbai’s playing XI in their next game against Kings XI Punjab on Thursday (October 1). (Agencies)