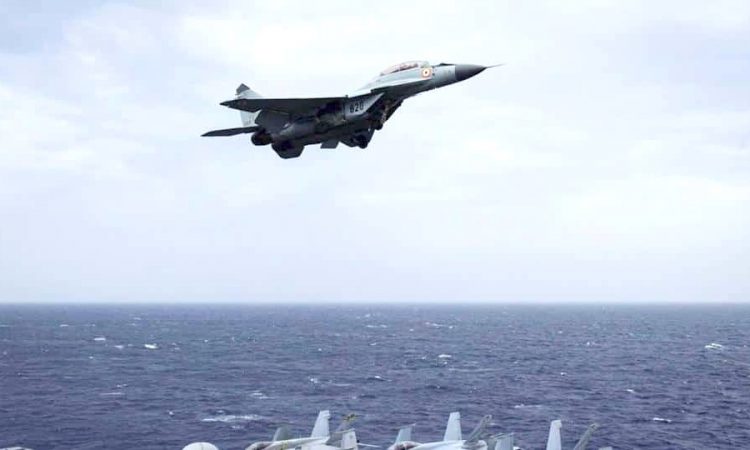 Some of the Russian-origin jets are being moved from Goa to Indian Air Force (IAF) bases in the north, keeping in mind the security scenario, an official said.(PTI File Photo )

New Delhi, July 21: The Indian Navy is deploying its MiG-29K fighter jets to key air force bases in the northern part of the country amid border tensions with China in the sensitive Ladakh sector, people familiar with developments said on Tuesday.
The navy has a fleet of more than 40 MiG-29K fighters, of which 18 are deployed on the country’s sole aircraft carrier, INS Vikramaditya, and the rest are based in Goa.
Some of the Russian-origin jets are being moved from Goa to Indian Air Force (IAF) bases in the north, keeping in mind the security scenario, an official said. The IAF has moved several fighters from airbases in north India to Ladakh sector as part of a plan to strengthen the military posture there, said a second official.
It couldn’t immediately be ascertained what role the naval fighters would be used for.
“If assets and operational pilots are available, why not utilise them,” said naval affairs expert Captain (retired) DK Sharma.
The Indian Navy has been part of the military’s ongoing efforts in Ladakh sector, which has been the focus of the standoff since 20 Indian soldiers were killed in a violent clash on June 15.
The navy’s P-8I maritime patrol and reconnaissance aircraft have been used for surveillance of Ladakh sector, while their primary role encompasses carrying out anti-submarine warfare, anti-surface warfare, and surveillance and reconnaissance of the oceans. The P-8Is, imported from the US, carried out similar surveillance missions during the 2017 Doklam standoff with China.
The navy has also been active in the Indian Ocean, where it is keeping a close watch on possible Chinese naval activities. On Monday, a US Navy carrier strike group, led by USS Nimitz, conducted maritime drills with Indian warships in the Indian Ocean. The passage exercise involved a total of eight Indian and US warships.
The drills came at a time when tensions have mounted over China’s activities in South China Sea, where the US Navy has conducted a major exercise involving two carrier strike groups.
The navy has been on operational alert in the Indian Ocean, where scores of warships are ready for any task in the aftermath of the border row. It has positioned warships along critical sea lanes of communication and choke points under its mission-based deployment model, and the vessels can be diverted for any mission.
Indian warships are deployed from as far as the Persian Gulf to the Malacca Strait, and from northern Bay of Bengal to the southeast coast of Africa. (HT)