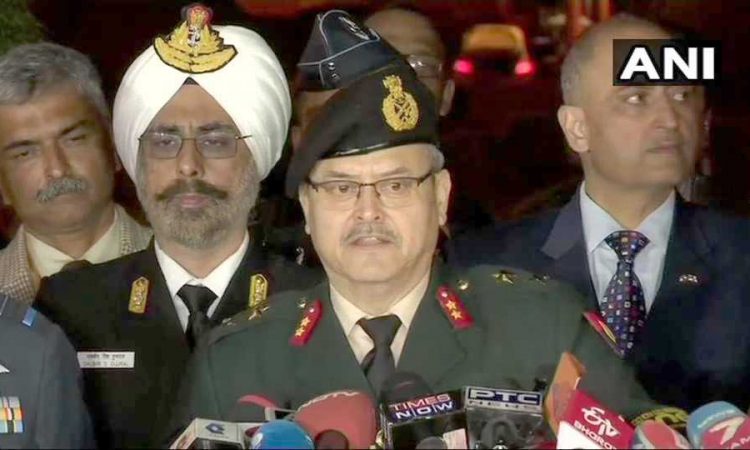 NEW DELHI, February 28: The Indian Army, Air Force and Navy united in one voice to issue a stern warning to Pakistan to not attempt any misadventures against the country and that any action would be dealt with with a heavy hand.
In the first joint briefing since Pakistan’s attempts to hit Indian military installations on Thursday, the Army, Navy and Air Force said they were fully prepared and in a heightened state of readiness to respond to any provocation by Pakistan.
“Pakistan has targeted our military installations. They have escalated matters. If they provoke us any further, we are prepared for exigencies,” said Major General Surendra Singh Mahal.
“We continue to maintain strict vigil along both the Line of Control and International Border. Our ground based air defence weapon system are put on high alert. I wish to assure the nation that we are fully prepared and in a heightened state of readiness,” he added.
Major General Mahal told the media that on Wednesday Pakistani jets tried to target a Brigade Headquarters, a Battalion Headquarters and logistics installations in Jammu and Kashmir.
The Pakistan Air Force (PAF) bombs fell in the Indian Army formation compound, but there was no significant damage, said Air Vice Marshal RGK Kapoor.
Air Vice Marshal Kapoor refuted Pakistan’s claims that F-16s were not used, saying there were electronic signatures to prove that the planes had been deployed by Pakistan.
Rear Admiral DS Gujral said that the Navy was ready to defeat any misadventure by Pakistan. “The Indian Navy is deployed in a high state of readiness and remains poised in all three dimensions; on surface, under sea and in air to deter, prevent and defeat any misadventure by Pakistan in the maritime domain,” he said.
The briefing was postponed by two hours from 5 pm after Pakistan Prime Minister Imran Khan announced that he would free captured pilot Abhinandan Varthaman tomorrow as a “gesture of peace”.
Asked whether he saw it as a goodwill gesture, Air Vice Marshal RGK Kapoor said: “We see it as a gesture in consonance with the Geneva Convention.”
He added: “We will be extremely happy to see the Wing Commander back. Once he’s back we’ll comment on what Imran Khan and Pakistan said.”
Air Vice Marshal RGK Kapoor said there was evidence of Pakistan’s attempts to escalate hostilities. Pakistan used F-16s armed with AMRAAM (American Long Range Air-to-Air Missiles) to target Indian military installations, he said.
“The Pakistani package comprised F-16s and JF-17s, and perhaps some Mirage(s),” said Air Vice Marshal Kapoor.
Parts of the missile were displayed as proof to the media.
A package of 24 Pakistani aircraft was intercepted by eight IAF fighters, which included a MiG 21 Bison piloted by Wing Commander Abhinandan Varthaman.
The Pakistani Air Force strike package included eight F-16s, four Mirage-3 aircraft, four Chinese made JF-17 “Thunder” fighter.
The large Pakistani attack formation was detected at 9.45 am, when they came within 10 km of the Line of Control.
The Wing Commander was in hot pursuit of a Pakistani F-16 jet, which he engaged with an R-73 air-to-air missile. The state-of-the-art Pakistani fighter, thought to be a two-seater variant of the jet, was shot down. Both pilots were seen parachuting down on the Pakistani side of the Line of Control.
The Air Force fighters gave chase to the Pakistani jets on their return leg after they had dropped a handful of laser-guided bombs that narrowly missed their military targets along the Line of Control.
Wing Commander Abhinandan Varthaman’s plane was also hit by an AMRAAM. He was forced to eject in the Pakistani side of the LoC and was captured.
Pakistan Prime Minister Imran Khan on Wednesday said that Wing Commander Abhinandan Varthaman would be released on Thursday as a “Gesture of Peace”. (Agencies)