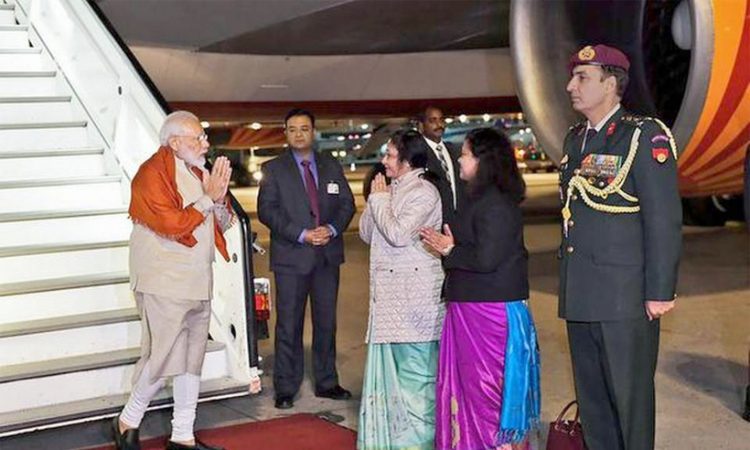 Houstan, September 21: Indian-Americans in Houston are all set to welcome Prime Minister Narendra Modi for the mega “Howdy, Modi” event on Sunday, to be attended by 50,000 people, the largest gathering ever for an elected foreign leader visiting the U.S., other than the Pope.
The three-hour “Howdy, Modi!” event in which President Donald Trump will join Mr. Modi is being organised at the sprawling NRG Football Stadium, one of the largest in the U.S., with an impressive history of shows that starred Beyonce, Metallica, U2.
Ambassador Harsh V Shringla along with his team previewed the event at the stadium early on Friday, where preparations are in full swing and over 1,500 volunteers are working round the clock to make it a memorable event.
A rally was organised on Friday at the stadium where more than 200 cars participated, waving flags of both India and the U.S. to signify their friendship.
The organisers and volunteers sporting ‘NAMO AGAIN’ shirts, shouted “NaMo Again” and said they were ready to welcome Modi “wholeheartedly”.
Texas India Forum (TIF) spokespersons Priti Dawra, Gitesh Desai and Rishi Bhutada on Friday briefed media about the event timeline, what to expect and why Houston was chosen for such a mega community event.
“The event is a grand celebration of culture and unity of America and India, where attendees will hear Modi speak about the deepening U.S.-India ties strengthened by the confirmations of over 3 million Indian Americans and will lay out his vision of the continuous India’s growth and development as he begins his second term following his historic re-election,” Ms. Dawra said.
“First time the leaders of the world’s two biggest democracies are appearing together at such an event to share their resolve to build strong partnership,” she said.
They will showcase the growing geopolitical partnership, commitment to global peace and prosperity through entrepreneurship, hard work and sacrifice of the people of both nations. Their presence is also a sign of the positive growing influence of Indo Americans and their invaluable contributions to Texas and the U.S., the spokespersons said.
Dawra said President Trump’s participation shows he is highlighting his “goodwill and friendship” towards Mr. Modi, the people of India and the Indian American diaspora.
A bipartisan group of senior elected officials, leaders from the U.S. government including, Senators, governors and mayors will also attend.
“The ‘Howdy, Modi’ is about the unity of culture and it will bring the entire U.S., India and Texas closer than ever. The TIF is deeply grateful for this opportunity to bring together such a historic event driven in large part by the diverse community of Americans all over the U.S.,” she said.
Texas accounts for 10% of India-U.S. trade — about $7 billion worth of U.S. goods and commodities are moved between Texas and India.
Some of the largest companies are setting up their headquarters all over Texas, creating jobs and opportunities for Americans and Indian Americans.
“India is Houston’s fourth largest trading partner today just behind Brazil, China and Mexico. It attracts the largest influx of Indian population and investment. Houston is uniquely positioned towards this community summit as it is the energy, space and the medical centre capital of the world,” she said.
‘Howdy, Modi’ is the community summit organised by the contributions of over 600 organisations 1,000 volunteers and attendees representing all the 50 States of the U.S.
“Indian Americans are not just the most educated and affluent community in the U.S., but it is also now recognised for serving across all fields including military medicine and education; highly respected doctors, engineers, entrepreneurs, empowering the U.S. economy,” she said.
The spirit and diversity of the community will be showcased by the specially curated cultural programme “WOVEN” at the start of the event, featuring 400 artists, she said.
The NRG gates will open at 6 AM to accommodate and seat 50,000 people by 9 AM, after which the cultural programme will begin and continue till 10:30 am, and will be broadcast live in Hindi, English and Spanish languages followed by the address of the two leaders. The event will end by 12:30 PM, after which Mr. Modi will join a private community reception before heading to New York for the UN General Assembly session and other engagements. (PTI)