HomeTop StoriesIndia will hit back with ‘double the force’ if its sovereignty is challenged: PM
Top Stories
2 years agoOctober 21, 2018No tags 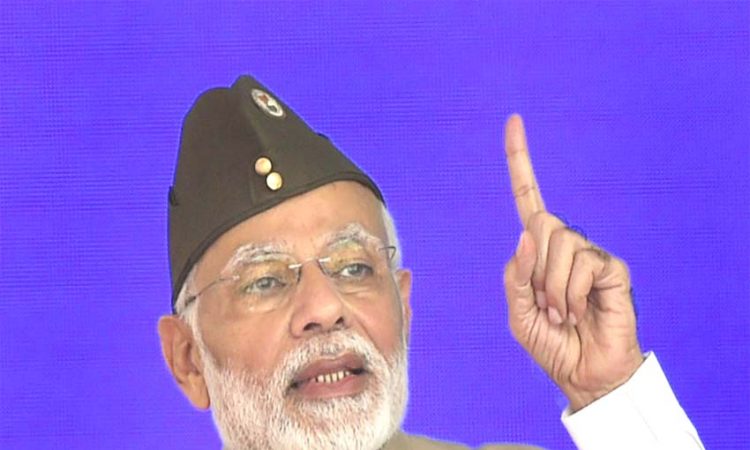 New Delhi, October 21: India never eyes anyone else’s territory but will hit back with “double the force” if its sovereignty is ever challenged, Prime Minister Narendra Modi said Sunday at an event to mark the 75th anniversary of proclamation of the Azad Hind government by Subhas Chandra Bose.
He also said his government is working towards providing the armed fores with better technology and latest weapons even as efforts are underway to make the lives of soldiers easier by giving them better facilities.
“We are heading towards building an army which was once envisioned by Netaji (Bose),” PM said.
Modi said his government took decisions such as carrying out surgical strikes across the Line of Control and providing benefits of ‘one rank, one pension’ to ex-servicemen.
The prime minister hoisted the national flag at the historic Red Fort to mark the event.
Donning the cap of the Indian National Army presented to him by one of the close aides of Bose, Modi said it has been the Indian tradition not to eye someone else’s territory, “but when our sovereignty is challenged, we will hit back with double the force”.
The prime minister said India will continue to use its military might “only for self defence”.
He also cautioned people against forces inside and outside India which are working against the country by targeting its independence, unity and constitution.
“It is the duty of every Indian to fight and defeat such forces,” he said, adding that a feeling of nationalism and “Indianness” is must to counter such designs.
Referring to the opposition faced by Bose when he decided to establish the Rani Jhansi Regiment — an all women unit of the INA, Modi said the regiment would complete 75 years of its establishment on Monday.
He said the present government is trying to fulfil the dreams of Bose even as he recalled the decision to allow women in the Army to opt for permanent commission from short service commission following a transparent procedure.
The prime minister said the air force is set to have the first batch of women fighter pilots.
“Today, India has Nirmala Sitharaman as its first woman defence minster,” he pointed out.
He said arrears worth Rs 11,000 crore have been released for ex-servicemen under the ‘one rank, one pension’ (OROP) scheme. OROP, coupled by recommendations of the seventh pay commission, has given “double bonanza” to former servicemen, he said.
Modi also said the work on the National War Memorial is in its last stages.
Meanwhile, in a veiled attack on the Nehru-Gandhi clan, Prime Minister Narendra Modi today alleged the contribution of several great leaders such as Sardar Patel, B R Ambedkar and Subhash Chandra Bose to the freedom struggle was “deliberately” forgotten to glorify “one family”.
He also said it is high time more Indians knew about the historic role these stalwarts played.
PM Modi lamented that post-Independence, India’s policies were based on the British system as “things were seen through British glasses”.
“Policies, including those related to education, had to suffer because of this,” he said, adding that “Subhash babu always took pride in India’s history and our rich values. He taught us that not everything must be seen from a non-Indian prism.”
He said in the later decades of independent India, “if the country had got the guidance of personalities like Subhash Babu, Sardar Patel, the conditions would vary greatly”.
PM Modi said that his government is changing that now.
“It is unfair that to glorify one family, the contribution of several other great leaders was deliberately forgotten. It is high time more Indians knew about the historic role of stalwarts Sardar Patel, Babasaheb Ambedkar and Netaji Subhas Bose,” he said.
The PM said while Bose focused on the East and Northeast India, the two regions did not get due recognition. Now, he said, his government is working to make the Northeast the “engine of growth”.
Hailing Bose’s spirit of nationalism, PM Modi said as a 16-year old, he was pained at the plight of India under the British rule.
“His ideology was nationalism… He lived by it. All over the world, people took inspiration from Netaji Subhas Bose in their fights against colonialism and inequality. We remain committed to fulfilling Netaji’s ideals and building an India he would be proud of,” he said.(PTI)