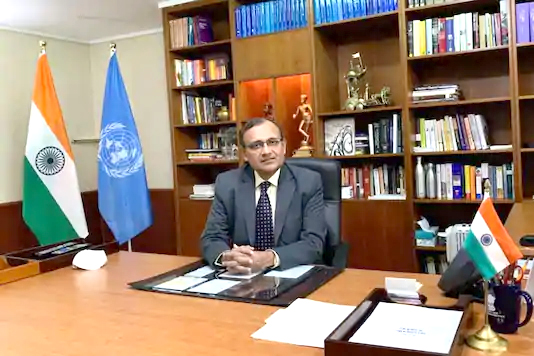 United Nations, January 6: India will be a voice for the developing world and against the common enemies of humanity like terrorism, India’s Ambassador to the UN has said, asserting that the country will use its tenure on the UN Security Council to bring human-centric and inclusive solutions to matters of global peace and security.
India’s Permanent Representative to the UN, T S Tirumurti, made the remarks while speaking at a special flag installation ceremony organised at the Security Council stakeout here on Monday. Flags of the five new incoming non-permanent members of the Security Council – India, Norway, Kenya, Ireland and Mexico – were installed at the stakeout during the special ceremony.
On January 1, India began its tenure as non-permanent member of the powerful 15-nation UN organ for the 2021-22 term.
Tirumurti installed the Indian tricolour and said that as India assumes the membership of the Security Council for the eighth time: “it is an honour for me as the Permanent Representative of India to take part in today’s flag installation ceremony.”
“India comes into the Security Council as the largest democracy representing 1/6th of humanity and with a strong commitment to reformed multilateralism, rule of law, a fair and equitable international system and to peace, security and development. From Kashmir to Kanyakumari, we stand united as one, bound by our ethos of democracy, pluralism and commitment to fundamental rights,” Tirumurti said.
He said India will “use our tenure to bring human-centric and inclusive solutions to matters of international peace and security. India will be a voice for the developing world.”
“We will not shy away from raising our voice against the common enemies of humanity like terrorism,” he said, adding that India looks forward to “our collective pursuit for an ideal where the World is One Family – Vasudhaiva Kutumbakam’.”
The Indian envoy said peace-keeping, peace-building, maritime security, women and youth, especially in conflict situations, and technology with a human face, will receive India’s attention while on the 15-nation Council.
Noting that even as the world comes together in solidarity to face the COVID-19 pandemic, Tirumurti quoted Indian philosopher Swami Vivekananda to say, “Each nation must give, in order to live. When you give life, you will have life; when you receive, you must pay for it by giving to all others.”
Tirumurti also expressed gratitude to all the Member States of the United Nations who have given us an overwhelming mandate to represent them in the Security Council.
The ceremony was organised in a restricted format keeping in mind the strict COVID-19 protocols. Ambassadors of the other four countries also installed their national flags at the stakeout.
Permanent Representative of Kazakhstan to the UN Magzhan Ilyassov welcomed the newly elected non-permanent members of the Security Council and expressed confidence that they “will make a sterling contribution” to the Council’s work in the two crucial years of modern history.
We acknowledge that these five incoming members, because of their prior long-standing experience with the Council, will bring much depth and focus to the issues of peace and security, he said.
He paid special tribute to the scientists who have dedicated their efforts to combat the pandemic and develop the COVID-19 vaccines.
This new year is the year of hope for all of us no doubt and for our world organisation, global peace, security and further sustainable development in 2021 will largely depend on the decisions of the United Nations and the Security Council with its permanent and non-permanent members, he said.
Ambassador Tarek Ladeb, Permanent Representative of Tunisia to the UN and President of the Security Council for the month of January, extended a warm welcome to the incoming members.
I hope together with the new elected members, we will manage to create positive dynamics in the Council and make concrete steps towards the resolution of conflicts.

In his address to the virtual high-level UN General Assembly session in September last year, Prime Minister Narendra Modi had said that as the world’s largest democracy, India will bring its years of rich developmental experience for the benefit of the whole world when the country sits on the horseshoe table of the Council.
“India will always speak in support of peace, security and prosperity. India will not hesitate in raising its voice against the enemies of humanity, human race and human values – these include terrorism, smuggling of illegal weapons, drugs and money-laundering,” Modi had said.
India, Norway, Kenya, Ireland and Mexico join non-permanent members Estonia, Niger, Saint Vincent and the Grenadines, Tunisia and Vietnam and the five permanent members China, France, Russia, UK and the US in the Council for 2021.
India will be UNSC President in August 2021 and will preside over the Council again for a month in 2022. The presidency of the Council is held by each of the members in turn for one month, following the English alphabetical order of the Member States’ names.
The tradition of the flag installation ceremony was introduced by Kazakhstan in 2018. The ceremony was unanimously confirmed by all 15 UNSC members to become an annual tradition of the Security Council. (PTI)