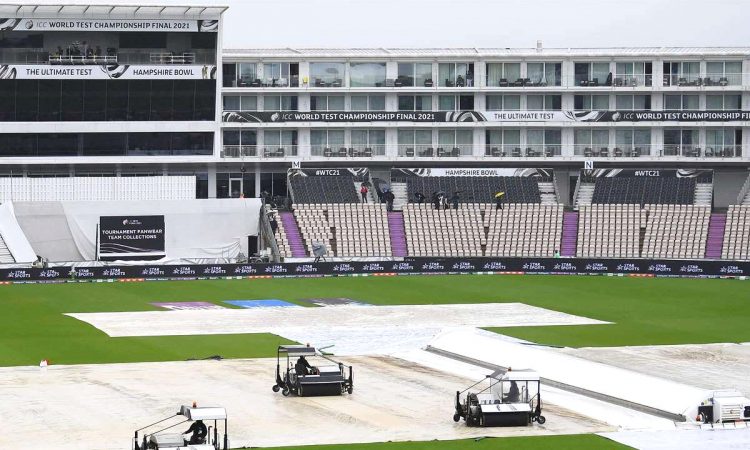 Only 141.1 overs have been bowled in the match so far as the inclement Southampton weather continued to bedevil the inaugural edition of Test cricket's pinnacle event. (Getty Images)

SOUTHAMPTON, June 21: The fickle English weather played spoilsport in a game promising high quality contest as day four of the inaugural World Test Championship final between India and New Zealand was washed out due to rain.

For the second time in the one-off clash, a whole day was lost after no play was possible also on the opening day.
With the weather not improving since morning at the Hampshire Bowl, the umpires took the call almost four hours and 30 minutes after the scheduled start time of 10.30 am local time (3 pm IST).
“Day four of the #WTC21 Final has been abandoned due to persistent rain,” read an ICC update.
The fans who were patiently waiting for the play to start had to leave disappointed.
“We thank our fans who turned up and kept the tempo high. See you again, tomorrow,” the BCCI added.
Rain is not forecast for the remaining two days of the big final but it is likely to remain overcast as it has been the case so far when play did take place. When it wasn’t the rain, bad light stopped play on both day two and day three.
A maximum of 196 overs can be played in the game to force a result. The trophy will be shared if the game is drawn.
The final was nicely poised at stumps on day three with New Zealand reaching 101 for two in response to India’s 217 all out. The Black Caps however remain in control of the game despite a late strike from Ishant Sharma close to stumps.
Weather has played havoc with the first ever World Test Championship final and former cricketers including Kevin Pietersen has questioned the scheduling of the game in the UK.
“It pains me to say it, but a ONE OFF & incredibly important cricket game should NOT be played in the UK,” tweeted the former England batsman, who wants these kind of games to be played in the UAE with minimal chance of weather intervention.
Former India opener Virender Sehwag was also among the ones who questioned ICC’s decision to host the final in Southampton.
WTC Final: ‘Incredibly important game’ should not be played in UK, says Kevin Pietersen
Former England skipper Kevin Pietersen has advocated to not stage an “incredibly important cricket game” in the United Kingdom (UK) following constant interruptions caused by rain in the ongoing World Test Championship (WTC) final.
The first session of Day 4 of the WTC final between India and New Zealand was on Monday washed off at the Ageas Bowl.
“It pains me to say it, but a ONE OFF & incredibly important cricket game should NOT be played in the UK,” Pietersen tweeted.
Day 1 of the ongoing final was also abandoned due to rain while Day 2 saw early stumps being called due to bad light. A call on using the Reserve Day will be taken on the fifth afternoon.
Jamieson was New Zealand’s hero on the third day as he claimed his fifth five-wicket haul in just eight Tests to help the Black Caps seize the initiative in the WTC final.
The 26-year-old Jamieson, who only made his Test debut against India in February 2020, secured the all-important wicket of Virat Kohli to prevent the skipper from adding to his overnight score of 44.
He also dismissed the dangerous Rishabh Pant (4) before taking the wickets of Ishant Sharma and Jasprit Bumrah in successive balls as India slumped to 217 all out from 92.1 overs.

In reply, openers Tom Latham (30) and Devon Conway (54) put their side in the driving seat with a 70-run partnership before India hit back late to leave the Black Caps on 101 for two at the close of play on the third evening. (PTI/ANI)