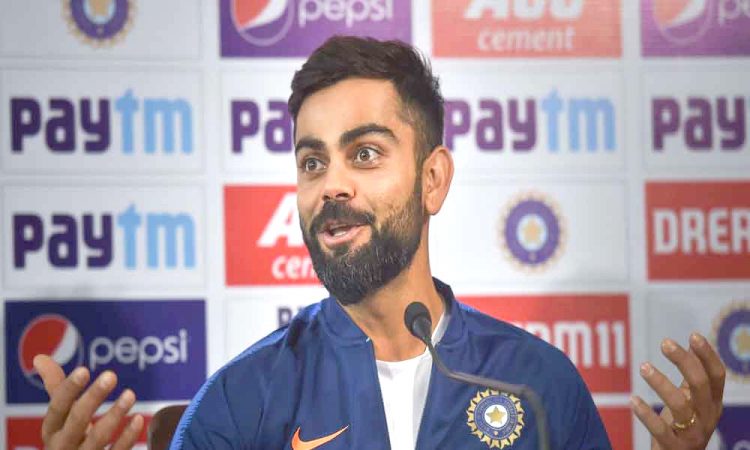 AHMEDABAD, February 23: To qualify for the World Test Championship (WTC) final, India need to win a Test and draw the other one against England in the ongoing Test series. But skipper Virat Kohli wants to win both the matches and not think about the WTC points table at present.

The four-match series between India and England currently stands level at 1-1 and now both teams will lock horns in the pink-ball Test, beginning on Wednesday at the Motera Stadium.
Kohli said the hosts’ focus is “solely” on the two Tests and the side is not contemplating on what will be the possible scenarios for the WTC finals.
“You can’t play for those kinds of reasons. We are not looking to win one and draw one, we are looking to win both Tests. For us these are two games of cricket and we are solely focused on. What it does afterward is a conversation for later,” said Kohli during the virtual press conference on Tuesday.
“In the present moment we are preparing for tomorrow, we are ready for the grand five days wanting to win a Test match for India then move on to the next one,” he further said.
Last year, the ICC had decided to change the point-rating system of WTC due to the COVID-19 pandemic. The WTC table has now been revised to rank teams based on the percentage of points earned from the series played, meaning teams are ranked in order of percentage of points earned.
Earlier this month, the India skipper had expressed disappointment with the logic behind the change in the rating system of WTC. And Kohli for now wants to focus on the two Tests against England and isn’t bothered about what lies ahead in the future.
“One day at a time is something we have followed for years and there is no point running far ahead going into the future. You have no idea what’s gonna happen so we will focus on what’s in the present moment,” Kohli said.
Adelaide 36 all out won’t affect us in Motera day-night Test: Kohli
India’s capitulation for 36 in the second innings of the first Test in Australia, a day-night game played with a pink ball in December, will not have an impact on the third Test against England that begins under lights here on Wednesday at the reconstructed Motera Stadium, said India captain Virat Kohli.
Kohli added that England, who too capitulated for 58 in their last pink ball Test against New Zealand in Auckland, also won’t be affected by a one-off dismal show.
“Both are bizarre experiences for two quality sides. If you ask England the same question — do you think you can be bowled out for 50-odd, their answer would probably be no. You understand that on a particular day, things are supposed to happen in a certain way,” said Kohli while speaking to the media on Tuesday ahead of the first pink ball Test since the Adelaide thrashing.
“Whatever you try to do, it seems to be out of control and nothing seems to go right. That happened to us in Adelaide. Barring those 45 minutes of bad cricket, we dominated that Test match. We are very confident in how we play the pink ball, even in Australia where the pitches were assisting their seamers. We brushed it aside and won in Melbourne. That (36 all out) is not a hindrance or mental scar,” he said.
Kohli said that even if the wicket is spinner-friendly, the pink ball is likely to assist seam and pace bowlers.

“The pink ball tends to swing a lot more than the normal red ball that we play with. We experienced that when we played the one match in 2019 with Bangladesh. It is much more challenging to play with the pink ball regardless of what pitch you are playing on especially in the evening. As a batting team if you are starting your innings under lights then that one and a half hours is very challenging,” said Kohli.
Opener Rohit Sharma had, on Sunday, said that the pitch for the third Test won’t be any different from the one used for the second Test at the MA Chidambaram Stadium in Chennai. That wicket started to help spinners from the first session of the first day itself.
Kohli felt that spinners will have a role but the fast bowlers won’t be ignored.
“Spin will come into play for sure. But I don’t think the new ball and the fast bowlers can be ignored. The pink ball does bring them into the game till the ball is nice and shiny. It is something that we are very well aware of and are preparing accordingly,” said Kohli.
“Last time we experienced that the first session is the nicest to bat when the sun is out and the ball doesn’t do that much. But when it starts to get dark especially during the twilight period, it gets very tricky. The light changes. It is very difficult to sight the ball and under lights, the ball tends to swing much. I think it is reversal of roles and you have to adjust quite quickly as batsman,” he said.
Kohli said that batsmen have to start from scratch once it becomes dark regardless of how well they have played throughout the day.
“Even if you might be batting since the afternoon, but you have to take guard again (with lights on) and start from scratch. You probably have to be a bit more disciplined than in the day. Similarly with bowlers, plan in afternoon to bowl consistent length and then in afternoon to attack more,” he added.
Kohli said that movement doesn’t bother the Indians too much as “we have beaten England in their own home where the ball does way more”.
He also said that his immediate focus is not on the World Test Championship final to qualify for which India need to win the final two Tests of the four-match series. The team’s focus is to win both Tests, he said.
“You can’t play for reasons (like WTC). We are looking to win both. For us, these are two games of cricket, that is a reality. At the present moment, we are preparing for tomorrow. We are ready to grind for five days and move onto the next. No point running into the future too far ahead,” he said. (Agencies)