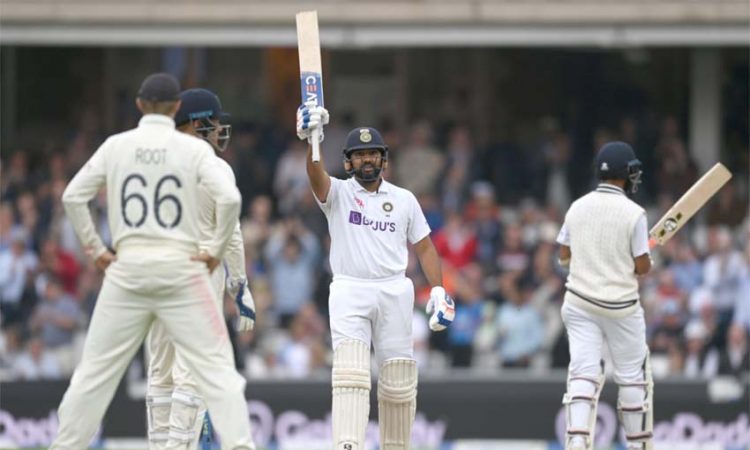 LONDON, September 4: A determined Rohit Sharma showed exceptionally steely temperament to score the eighth and most significant century of his Test career that propelled India to a fighting position with an overall lead of 171 runs after third day’s play in the fourth Test against England here on Saturday.

Having displayed incredibly gorgeous defensive technique throughout the series with unflinching determination, the innings of 127 (256 balls) in India’s day-end score of 270 for 3 was the culmination of all the hardwork put in over the past two years.
The 153-run second wicket stand with a confident Cheteshwar Pujara (61 off 127 balls) had put India in a position of command at 236 for 1 before Ollie Robinson (21-4-67-2) got quick breakthroughs with the second new ball saw to sent packing two set batsmen.
While Rohit misjudged a slower delivery as he couldn’t keep his pull shot down, Robinson bowled an in-cutter that took the inside edge off Pujara’s bat into the pads and flew towards slip for an easy catch.
At stumps, Indian captain Virat Kohli (22 batting) looked in good nick in the company of Ravindra Jadeja (9 batting), who was once again promoted ahead of Ajinkya Rahane.
The Test may not go the distance but what one can surely guarantee is an engrossing fourth day, thanks to Rohit’s superlative knock. Any target in excess of 225 and closer to 250 will be challenging on this track and especially with a batting line-up where Joe Root is the only consistent performer.
One of the more elegant among modern day batsmen, Rohit during the series curbed all his ego to present a solid defence but brought his ‘Hit-Man’ instincts to the fore with a straight six off Moeen Ali that hit the second tier of the Oval stands en route his hundred.
An ecstatic captain Virat Kohli punching his fists and serene smile that refused to leave head coach Ravi Shastri’s lips said it all.

He is one of the most loved men in that Indian dressing room and this hundred which belonged more to the team than Rohit himself will remain a popular milestone in terms of importance quotient.
It took eight years and 43 Test matches to get an overseas hundred and that too in England in tough conditions, and there won’t be any second guess about where this knock of Rohit will rank among his eight tons. (PTI)