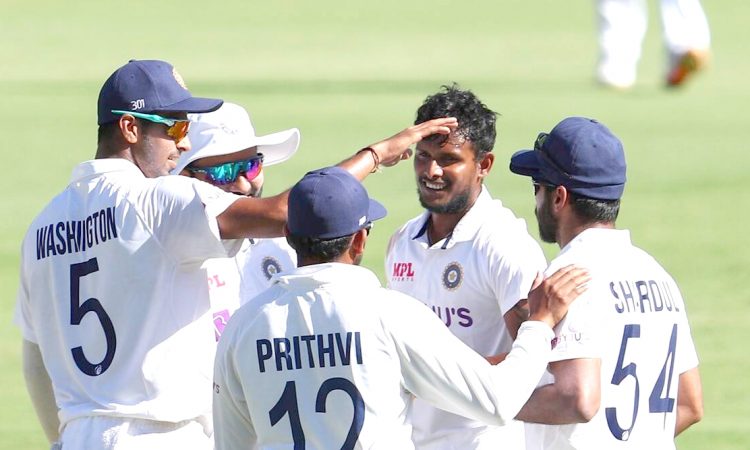 India's Thangarasu Natarajan, second right, is congratulated by teammates after dismissing Australia's Matthew Wade during play on the first day of the fourth cricket test between India and Australia at the Gabba, Brisbane, Australia, Friday, Jan. 15, 2021. (AP Photo/Tertius Pickard)

BRISBANE, January 15: The incredible underdog fairytale of Thangarasu Natarajan got better with his twin strikes on debut headlining a commendable effort from an inexperienced Indian bowling attack, which reduced Australia to 274 for 5 despite a stylish hundred from Marnus Labuschagne on the opening day of the final Test here.
The Indian attack, with a collective experience of 3 Tests and 10 balls and 11 wickets in its kitty, was pitted against a batting line-up with 59 hundreds.

After 87 overs, the two Tamil Nadu rookies Natarajan (20-2-63-2) and Washington Sundar (2-4-63-1) could hold their heads high for a lion-hearted effort on a good batting pitch in the absence of the injured Ravichandran Ashwin and Jasprit Bumrah.
If tall off-spinner Washington set up a nice little trap to get rid of Steve Smith (36 off 77 balls), Natarajan forced centurion Labuschagne (108 off 204 balls) and Matthew Wade (47 off 85 balls) to miscue their pull-shots after a 113-run stand which threatened to put India in a spot.
At stumps, Tim Paine (38) and Cameron Green (28) had added 61 runs for the sixth wicket and the visitors would need a few quick wickets to keep the first innings total within a manageable range.
The distance between Palayampatti, a non-descript village in Tamil Nadu’s Salem, to Australia’s modern city Brisbane is 9035 km on a google map.
But add the hardships of a daily wager mother trying to put food on table, being called for suspect action early in his career, not being privileged enough to get a paternity leave (his daughter is already three months old), it’s a million miles emotionally that Team India’s favourite “Nattu” has traversed.
Getting Labuschagne, who was on a rampage, with a short delivery ensured that Australia didn’t finish the day with a score close to 350.
For someone, who was supposed to be a net bowler, India’s Test Cap No 300, did well enough on the first day despite not exactly being a natural. He also knows that he doesn’t have the express pace to trouble batsmen (his average speed is 130 plus).
He bowled full during his first two spells and made the length shorter when the ball got old and that’s how he induced Wade and Labuschagne to go for those pull shots.
Nobody would have blamed a Natarajan or a Shardul or “leader of the attack” Mohammed Siraj (19-8-51-1), all of whom toiled manfully throughout their multiple spells in a battle of unequals.
The inexperience was palpable as Thakur (18-5-67-1) bowled a lot of full pitched deliveries which Labuschagne pounced on in the second and third sessions during an innings that had nine boundaries.
If all the injuries weren’t enough, Navdeep Saini (7.5 overs) now seems to be in trouble as he has sustained a groin niggle moments after his skipper Ajinkya Rahane dropped a dolly at gully when Labuschagne was on 37.
By far, Australia’s most consistent batsman in the series, Labuschagne batted in two gears during the day.
In the first session, he faced 82 balls and sedately moved to 19 but in the next 113 balls, scored another 82 runs to reach his fifth hundred in 195 balls.
He trusted the bounce, hit some lovely drives and was also ready to pull anything that was short.
During his partnership with Smith, the former Australian skipper was the aggressor but Washington, a specialist batsman till 2016 and now a frontline off-spinner, with the help of his seniors — skipper Rahane and his deputy Rohit Sharma — laid a beautiful trap.
Washington had bowled three maiden overs prior to lunch and the fidgety Smith, who is always looking to get a move on, fell for the leg trap that was set for him.
Rohit stationed himself at short mid-wicket for a whip that Smith plays on the on-side.

They were banking on the extra bounce that they had seen Washington generate with the white ball.
The plan worked as Smith flicked one straight into Rohit’s hands just few minutes after the lunch.
Having lost four of their key players (Bumrah, Ashwin, Ravindra Jadeja and Hauma Vihari) due to various injuries, Rahane couldn’t have lost a worst toss as Tim Paine elected to bat.
The new-look Indian bowling line-up kept it steady at the onset removing openers David Warner and Marcus Harris in the first session.
That Australia forced a half-fit Warner (1) to play was evident when he had no apparent footwork while trying to drive an angular delivery from Siraj, which was brilliantly snapped by an agile Rohit diving to his right.
It could be seen that Warner, after his groin injury, was still finding it difficult to stretch his front-foot and get to the pitch of the delivery.
Thakur, whose debut against West Indies ended in a nightmare after bowling only 10 deliveries, achieved success, bowling the 11th one in the Test arena.
It was a gentle outswing, an inswing for left-handed Harris (5), who instinctively clipped it straight to debutant Sundar at square leg.
After SCG abuse, unruly fans at Gabba call Mohammed Siraj, Washington Sundar ‘grub’
A week after being racially abused in Sydney, India seamer Mohammed Siraj was once again targeted by the crowd on Friday in the ongoing fourth and final Test in Brisbane. As per a report in Morning Sydney Heralad, the 26-year-old was repeatedly called “grub” by a group of spectators.
The previous encounter between the two sides in Sydney was marred by racial abuse and the untoward gesture of crowd towards the Indian cricketers. Cricket Australia had also rendered an apology in this regard and as per the report the authorities are keeping a close eye on the behaviour of fans in Gabba.
In the third Test, which ended in a draw, Siraj brought the misconduct into the officals’ notice and subsequently six men from the crowd were escorted out by the police.
The report included that the noise came from the front section of 215 and 216 at the Gabba. It added that Washington Sundar, who is making his Test debut, was also subjected to similar name calling.
“The guys behind me have been calling – shouting – both Washington and Siraj grubs,” a spectator named Kate was quoted in the report as saying.
“It started targeted at Siraj and it was a chant similar to the SCG one (in which fans sung to the tune of Que Sera, Sera but substituted the lyrics with Que Shiraz, Shiraz). But this time it was Siraj. I suspect it’s not a coincidence that it’s Siraj being targeted post the SCG stuff.”
Kate further stated that after some time, a man yelled at Siraj asking him to wave, while calling him a “grub”.
“Siraj, give us a wave, give us a wave, give us a wave. Siraj, you bloody grub.” (PTI)