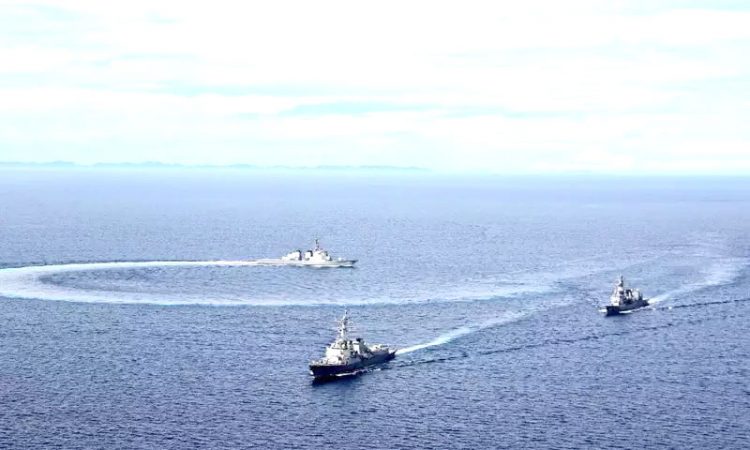 NEW DELHI, November 3: India, the United States, Japan and Australia — the four-nation group known as Quad — kicked off the mega Malabar naval exercises on Tuesday as they seek to challenge an expansionist China in the Indo-Pacific.
The Malabar exercise will see warships exercising in the Bay of Bengal near the Malacca Strait, a natural choke point and later in the Arabian Sea, along some of the world’s busiest trade routes. This is the first time in 13 years that the navies of all the four nations will come together for the mega war games.
China has been suspicious about the purpose of the Malabar exercise as it feels that the annual war game is an effort to contain its influence in the Indo-Pacific region.
Asked about the commencement of the exercises, China on Tuesday hoped that the quadrilateral drill would be conducive to the regional peace and stability instead of the contrary.
China has accused the US, which has been leading the effort to forge a common front among its allies, of a “Cold War mentality” and ideological prejudice.
Five ships of the Indian Navy, including a submarine, were deployed in the exercise along with US Navy’s John S McCain missile destroyer, Australia’s Ballarat frigate and a Japanese destroyer, the ministry of defence said.
There will be no contact between the military personnel of the four nations because of Covid-19 restrictions during the first phase of the drills running till November 6, it said.
Later this month, India and the United States will deploy aircraft carriers in the drills, a military source said.
“The exercise will showcase the high-levels of synergy and coordination between the friendly navies, which is based on their shared values and commitment to an open, inclusive Indo-Pacific and a rules-based international order,” the defence ministry said in its statement.
Setting the tone for the high-profile exercise, Australian defence minister Linda Reynolds said the need to cooperate with like-minded countries was stronger than ever before.
The exercise was an “important opportunity to work in concert with likeminded nations to support a secure, open, and inclusive Indo-Pacific region,” she added.
The naval exercise comes amid the worst border dispute in four decades between India and China and as the US heads to polls with President Donald Trump seeking a second term in office after a damaging trade war with Beijing.
It also comes close on the heels of a meeting of Quad nations where “antiChina” sentiments ran high. Shortly thereafter, US secretary of state Mike Pompeo embarked on a tour of India and other Indian Ocean islands like Sri Lanka and Maldives to press nations to push back against increasing Chinese exploitation.
Recently, India and the US also signed the long-pending Basic Exchange and Cooperation Agreement (BECA) in signs of deepening military ties.
BECA will enable the US to share advanced satellite and topographical data for long-range navigation and missile-targeting with India.
(ToI With inputs from agencies)