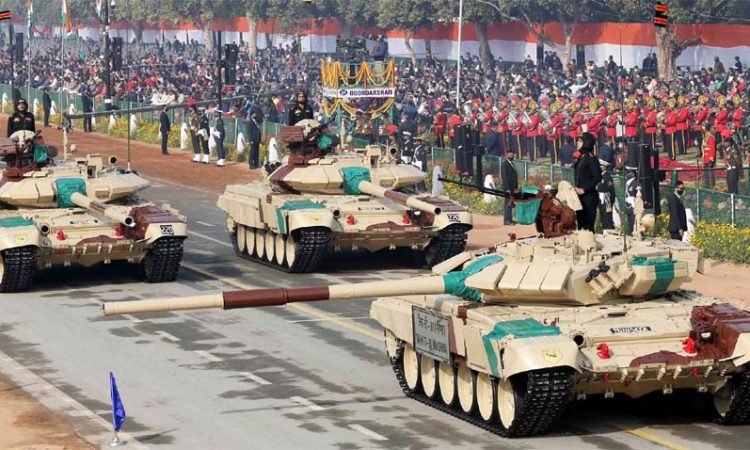 New Delhi, January 26: The newly inducted Rafale fighter aircraft was the show-stopper as India displayed its military might and vibrant cultural heritage on Rajpath on the 72nd Republic Day on Tuesday, with the ceremonial event this year being drastically scaled down in view of the COVID-19 pandemic.

India also displayed its key assets from the Army, including T-90 tanks and BrahMos missile system, BMP-II, two Pinaka multiple launch rocket system, two bridge laying tanks, electronic warfare equipment Samvijay’ and one upgraded Schilka air defence weapon system, the last one being Captain Preeti Choudhary from 140 Air Defence Regiment (Self Propelled).
The Rafale fighter aircraft featured for the first time in the Republic Day flypast as it carried out the ‘Vertical Charlie’ in a fitting finale.
Besides, it also flew as part of the ‘Eklavya’ formation with two Jaguar jets and two MiG-29 aircraft. A total of 38 IAF aircraft participated in the flypast.
The ceremony began with Prime Minister Narendra Modi leading the nation in paying homage to the martyrs by laying a wreath at the National War Memorial. Defence Minister Rajnath Singh, Chief of Defence Staff Gen Bipin Rawat, Army chief Gen M M Naravane, Navy chief Admiral Karambir Singh and IAF chief Air Chief Marshal R K S Bhadauria were also present on the occasion.
The parade, commanded by Lt Gen Vijay Kumar Mishra, with Maj Gen Alok Kacker as the second-in-command, began with President Ram Nath Kovind taking the salute. The national flag was unfurled followed by the national anthem, synchronised with a 21-gun salute.
Another first at the ceremony was a 122-member marching-cum-band contingent of the Bangladesh armed forces taking part in the parade.
The Bangladeshi tri-services contingent was the first marching contingent to walk down the ceremonial boulevard.
Lt Col Abu Md Shahnoor Shawon of the Bangladesh army, who spearheaded the parading contingent said, “It was an honour for us to be part of this august ceremony of India, and that too in the 50th year of our Independence. And, India gave us the honour to lead the parade.”
The Bangladeshi military band right behind the marching contingent played six tunes in all, including some of the iconic ones like war song ‘Chal Chal Chal’ by poet Kazi Nazrul Islam, and ‘Shono Ekti Mujiborer’.
Known otherwise to witness huge bustling crowds across many age groups, the annual ceremonial event at Rajpath was scaled down this time in view of the coronavirus pandemic, with spectators’ size drastically cut to 25,000 from about 1.25 lakh last year.
From members of contingents to spectators, everyone wore masks, the audience maintained the mandated distance while sitting, and standing spectators were not allowed.
The marching contingents’ route was also curtailed and they stopped at the National Stadium this year instead of following the regular route all the way to the Red Fort.
The size of the marching contingents was also reduced from regular 144 to 96 so that they could maintain social distancing, a senior official said.
Due to COVID-19 safety norms, gravity-defying stunts by motorcycle-borne men — a major attraction for the crowd at Republic Day celebrations on the Rajpath — were also missing this year.
Depicting the nation’s rich cultural heritage, 17 tableaux from states and Union territories, and nine from different Union ministries and paramilitary forces took part in the 72nd Republic Day celebrations.
Six tableaux from the defence arm, including one each from the Indian Air Force (IAF) and the Navy, were also part of the parade. Flt Lt Bhawana Kanth, the first woman pilot of the IAF was part of its tableau, which depicted scaled down models of Light Combat Aircraft, Light Combat Helicopter, Su-30 MKI and Rohini radar.
The Navy’s tableau displayed models of Indian naval ship (INS) Vikrant and naval operations that were conducted during the 1971 India-Pakistan war.
India is currently celebrating the Swarnim Vijay Varsh — the Golden Jubilee year — commemorating the country’s victory over Pakistan in the 1971 war that led to the creation of Bangladesh.
Young Union territory of Ladakh made its debut in the extravaganza on Rajpath with a beautiful tableau depicting the iconic Thikse Monastery and its rich cultural heritage.
The Union Territory of Ladakh was created in 2019 after the central government bifurcated the state of Jammu and Kashmir.

Other states and Union territories which showcased the diversity of India included Gujarat, Assam, Tamil Nadu, Maharashtra, Uttarakhand, Chhattisgarh, Punjab, Tripura, West Bengal, Sikkim, Uttar Pradesh, Karnataka, Kerala, Andhra Pradesh, Arunachal Pradesh and Delhi.
Ancient city Ayodhya’s heritage, replica of a Ram temple, glimpse of ‘Deepotsav’ and various stories from Ramayana epic were depicted in the tableau of Uttar Pradesh in the parade.
The CPWD float paid tribute to the sacrifices made by heroes of the armed forces, with a special floral tableau, while Delhi tableau depicted the pedestrianisation project of Chandni Chowk.
Bajasal, a folk dance from Kalahandi in Odisha, and performances themed on Fit India Movement and Aatmanirbhar Bharat were also presented on Rajpath. (PTI)