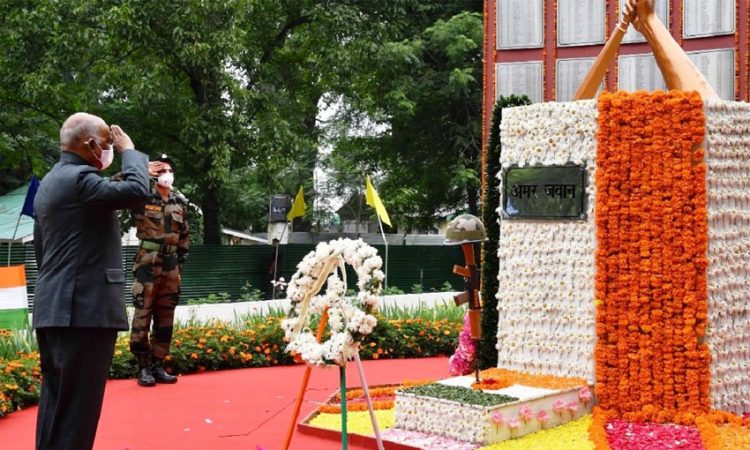 Kovind, who could not make it to the Kargil War Memorial in Drass due to bad weather, laid a wreath at the Dagger War Memorial in Baramulla district of neighbouring Jammu and Kashmir union territory to mark Kargil Vijay Diwas.
The nation salutes the soldiers and officers of the 19th Infantry Division, who have been safeguarding our borders in the most hostile terrains under adverse weather conditions as our frontline troops. They have scripted exceptional stories of indomitable courage, bravery and sacrifice, he said.
Kovind said the Dagger War Memorial evokes profound respect for the brave fighters who laid down their lives for the safety and security of our country.
I am sure that this memorial will educate the people of India about the highest values of the Indian Army and inspire them. Jai Hind! he wrote in the visitors’ book at the memorial.
Prime Minister Narendra Modi also paid homage to the Kargil martyrs saying “their bravery motivates us every single day”.
“We remember their sacrifices. We remember their valour.

“Today, on Kargil Vijay Diwas we pay homage to all those who lost their lives in Kargil protecting our nation. Their bravery motivates us every single day,” the prime minister tweeted from his handle.
As many as 527 soldiers laid down their lives while over 1300 sustained injuries during Operation VIJAY as the Indian Army repulsed an attack by Pakistani intruders in Kargil sector in 1999.
Vice President Venkaiah Naidu, while paying tributes to the soldiers, said the nation will remain forever grateful to them and their families.
Leaders from various parties, union ministers, chief ministers, governors were among the prominent people who paid homage to the martyrs. Ceremonies were held in several parts of the country to mark the occasion.
Union Home Minister Amit Shah, remembering all the brave soldiers of Kargil war, said,” Your indomitable courage, valour and sacrifice made it possible to gloriously unfurl the tricolor again on the inaccessible and challenging heights of Kargil.
A grateful nation bows to your dedication for keeping the integrity of the Nation intact,” he said in a tweet.
Defence Minister Rajnath Singh paid homage to the martyrs at the National War Memorial in New Delhi.
“Their supreme sacrifice will always be remembered and inspire coming generations,” Singh tweeted.

Congress leader Rahul Gandhi also lauded the martyrs and their families.
“My heartfelt tribute to every soldier who laid down his life while upholding the esteem of our Tricolor. We will always remember the supreme sacrifice for the security of the nation made by you and your families,” Gandhi tweeted in Hindi.
A solemn ceremony to celebrate the 22nd anniversary of the Kargil Vijay Diwas was held at the Kargil War Memorial at Drass, the the sector which witnessed some of the key battles between Indian army and Pakistani intruders.
Lt Governor, Ladakh, R K Mathur was the chief guest on the occasion who laid a wreath and paid his tributes to the fallen soldier, in a ceremony symbolising Shradhanjali’ from the entire nation to the brave hearts.
This years’s celebrations were unique in two ways as the Kargil Vijay Diwas coincided with the Swarnim Vijay Varsh Victory Flame’ reaching the Kargil War Memorial, a defence spokesman said.

The journey of the Victory Flame across the country commemorates 50 years of triumph in the 1971 Indo-Pak War.
The proceedings at the Kargil War Memorial commenced with the reception of the Swarnim Vijay Varsh Victory Flame’ by Chief of Defence Staff, General Bipin Rawat, in the presence of Lt Gen Y K Joshi, GOC-in-C Northern Command, Lt Gen PGK Menon, GOC 14 Corps, Lt Gen DP Pandey, GOC 15 Corps and Lt Gen M V Suchindra Kumar, GOC 16 Corps, other officers, gallantry awardees, Veer Naris, relatives of martyrs and civil dignitaries, the PRO Defence said.
He said it was followed by a wreath-laying ceremony by civil and military dignitaries.(PTI)
The gallantry awardees of the Kargil War, next of kin of brave hearts, and ‘veer naris’ also paid their tributes to the fallen heroes with tearful nostalgia, the spokesman said. (PTI)