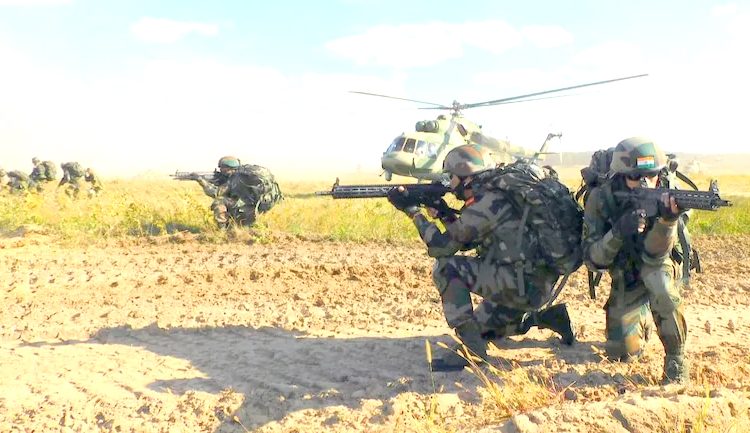 The aim of the exercise is to foster close relations between SCO member states, the Indian Army said.

New Delhi, September 15: India has participated in a multi-nation counter-terror exercise in Russia’s Orenburg region that has been organised under the aegis of the Shanghai Cooperation Organisation (SCO).

India has sent a team of 200 personnel for the sixth edition of ‘Exercise Peaceful Mission’ from September 13 to 25, the Indian Army said.
It said the aim of the exercise is to foster close relations between SCO member states and to enhance the abilities of the military leaders to command multi-national military contingents.
“The Indian military contingent comprised of an all arms combined force of 200 personnel including 38 personnel from the Indian Air Force,” the Army said in a statement.
It described the exercise as a landmark event in military interactions and global cooperation to counter-terrorism.
The Army said the exercise will enable sharing of best practices between the armed forces of the SCO nations.
“The exercise will also provide an opportunity to the Armed Forces of SCO Nations to train in counter-terrorism operations in an urban scenario in a multinational and joint environment,” the Army said.
“The scope of the exercise includes professional interaction, mutual understanding of drills and procedures, establishment of joint command and control structures and elimination of terrorist threats,” it said.
The SCO is an eight-member economic and security bloc and has emerged as one of the largest transregional international organisations.
India and Pakistan became its permanent members in 2017.
The SCO was founded at a summit in Shanghai in 2001 by the presidents of Russia, China, the Kyrgyz Republic, Kazakhstan, Tajikistan and Uzbekistan.
India has shown keen interest in deepening its security-related cooperation with the SCO and its regional anti-terrorism structure (RATS), which specifically deals with issues relating to security and defence.

India was made an observer at the SCO in 2005 and has generally participated in the ministerial-level meetings of the group focusing mainly on security and economic cooperation in the Eurasian region. (PTI)