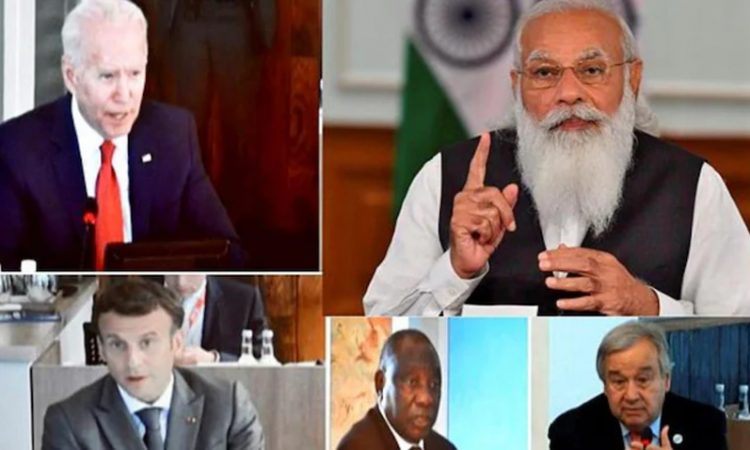 New Delhi, June 13: Prime Minister Narendra Modi on Sunday said India is a natural ally for the G7 and its partners in defending democracy, freedom of thought and liberty from a host of threats stemming from authoritarianism, terrorism, violent extremism and economic coercion.

The Prime Minister made the remarks in a virtual address at an outreach session of a summit of the Group of Seven (G7) richest democracies which was held in the British seaside resort of Cornwall.
The Ministry of External Affairs (MEA) said that Modi, as the lead speaker at the session titled ‘open societies and economies’, highlighted India’s civilisational commitment to democracy, freedom of thought and liberty.
“As the world’s largest democracy, India is a natural ally for the G7 and guest countries to defend these shared values from a host of threats stemming from authoritarianism, terrorism and violent extremism, disinformation and infodemics and economic coercion,” he said.
The Prime Minister also highlighted the revolutionary impact of digital technologies on social inclusion and empowerment in India through applications such as Aadhaar, Direct Benefit Transfer (DBT) and JAM (Jan Dhan-Aadhaar-Mobile) trinity.
While underscoring the vulnerabilities inherent in open societies, the prime minister called on tech companies and social media platforms to ensure a safe cyber environment for their users, additional secretary (economic relations) in the MEA P Harish said at a press conference.

“The prime minister’s views were appreciated by other leaders in the gathering,” he said.
Harish said the G7 leaders underlined their commitment to a free, open and a rules-based Indo-Pacific and resolved to collaborate with partners in the region.
The Group of Seven (G7) comprises the UK, Canada, France, Germany, Italy, Japan and the United States. As chair of G7, the UK invited India, Australia, South Korea and South Africa to the summit as Guest countries.
“Was happy to address the @G7 Session on Open Societies as a Lead Speaker. Democracy and freedom are part of India’s civilisational ethos, and find expression in the vibrancy and diversity of India’s society,” Modi tweeted.
In his address, the prime minister shared the concern expressed by several leaders that open societies are particularly vulnerable to disinformation and cyber-attacks, and stressed the need to ensure that cyberspace remains an avenue for advancing democratic values and not of subverting them.
Highlighting the non-democratic and unequal nature of global governance institutions, Modi also called for the reform of the multilateral system as the best signal of commitment to the cause of open societies.
The official said India’s participation at the G7 sessions reflected understanding within the bloc that resolution to “the biggest global crisis of our time” is not possible without India’s involvement and support, in a reference to coronavirus pandemic.
Prime Minister Modi also sought the support of the grouping on lifting patent protections for COVID-19 vaccines.
Modi’s call was supported by South African President Cyril Ramaphosa, Australian Prime Minister Scott Morrison, WTO Director-General Okonjo Iweala and UN Secretary-General Antonio Guterres, Harish said.
Asked whether the issue of Chinese aggressiveness was raised by Modi, he said it was not.
“The prime minister spoke on the need for open and democratic societies to work together and strengthen each other’s hands to defend the values they hold dear and respond to the increasing challenges,” Harish said.
“The particular issue was not raised at this meeting. But you know there are other forums where such issues are also being discussed,” he added.
Speaking at a session on climate change, the prime minister called for collective action, recognising that this challenge cannot be addressed in silos.

He mentioned India’s achievements on climate action and shared that India is the only G20 country on track to meet its Paris commitments.
He also took note of the increasing effectiveness of the two major global initiatives nurtured by India — the CDRI and the International Solar Alliance.
The Prime Minister stressed that developing countries need better access to climate finance, and called for a holistic approach towards climate change that covers all dimensions of the problem- mitigation, adaptation, technology transfer, climate financing, equity, climate justice and lifestyle change.
Modi also called on the G7 to meet their unfulfilled promise of USD 100 billion annually in climate finance.
“The Prime Minister’s message of global solidarity and unity, especially between open and democratic societies and economies, in tackling the global challenges of health, climate change and economic recovery was well received by the leaders at the Summit,” a government statement said.
Harish said India’s achievements have been highlighted by the UK in the Presidency statement it has released on the ‘Road to COP26’.
“As a climate responsible nation, we have shown leadership and innovation in addressing the threat of climate change. However as a developing country we have also brought this perspective to the G7 and highlighted the importance of recognising our different trajectories and historical responsibilities in the making of this crisis,” he said.
“Our voice and view have been heard and appreciated within the G7,” he added.
He said India is committed to installing 450 GW of renewable energy by 2030, and it will work with the UK to provide climate-resilient infrastructure through a new facility under the Coalition for Disaster Resilient Infrastructure (CDRI) to small island developing states.

Harish said India has also endorsed the ’30 by 30′ targets, which called for protecting 30 percent of the country’s land and 30 per cent of oceans by 2030.
Asked whether India will join the G-7-led infrastructure initiative, Harish indicated that the government will examine it.
“The prime minister said that democracies should reflect that we can deliver on project implementation…The PM also cited India’s experience in the neighbouring countries and Africa,” he said.
He said Modi indicated that India stands ready to do more in this regard keeping in view the ethos of transparency and inclusion.
On the specifics of the proposals, Harish said the relevant agencies of the government would study them and will engage as appropriate. (PTI)