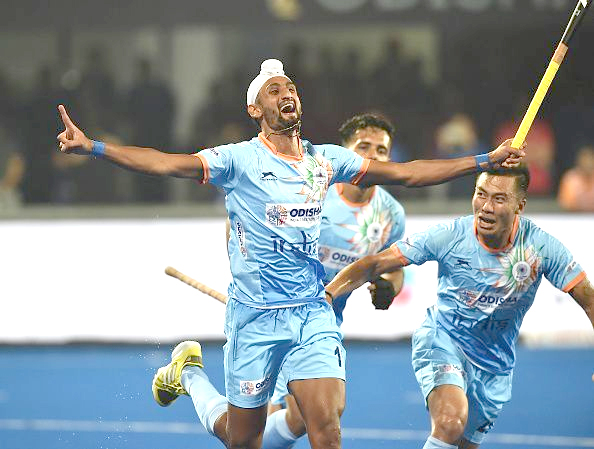 Bhubaneswar, November 28: India started their Hockey World Cup 2018 campaign with a 5-0 win against South Africa in their first Pool C encounter at the Kalinga Stadium in Bhubaneswar. The Manpreet Singh-led side dominated South Africa in all the four quarters of the game, as Mandeep Singh opened the scoring in the tenth minute quarter. And as Akashdeep Singh scored India’s second goal in the 12th minute of the same quarter, South Africa had lost their steam, eventually letting India pump three more.
In the other Pool C game today, Belgium pipped Canada 2-1. Felix Denayer gave an early lead to Belgium by scoring in the very third minute of the game, while skipper Thomas Briels extended the lead to 2-0 after he found the back of the net in the 22nd minute.
It seemed Belgium would register an easy win, but Mark Pearson gave some hope to Canada after converting a penalty corner in the 49th minutes of the game. The North American nation however failed to equalise the score, suffering a narrow 1-2 loss to the Red Lions.
India’s next game is against Belgium on December 2, following which India play Canada on December 8. (Agencies)

50th CSA from today at Chümoukedima