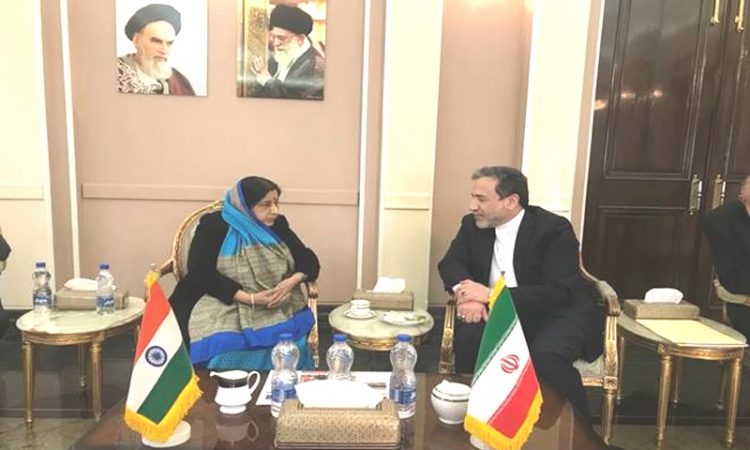 Tehran, February 17: India and Iran, after suffering from two “heinous” terrorist attacks in the past few days, have agreed on close cooperation to combat terrorism in the region as external affairs minister Sushma Swaraj met the country’s deputy foreign minister Seyed Abbas Araghchi in Tehran.
The meeting between Swaraj and Araghchi came hours after Iran’s Major General Mohammad Ali Jafari, referring to Pakistan-based terror outfit Jaish al-Adl, said the government of Pakistan must pay the price of harbouring these terrorist groups and this price will undoubtedly be very high.
Iran’s Revolutionary Guards accused Pakistan’s security forces of supporting the perpetrators of a suicide bombing in which 27 troops were killed on Wednesday. India has also blamed Pakistan for the Pulwama terror attack on Thursday that killed 40 CRPF troops.
Swaraj, during a brief stopover in Tehran on her way to Bulgaria, met Araghchi and discussed bilateral issues on Saturday. The two countries agreed on close cooperation to combat terrorism in the region.
“Iran and India suffered from two heinous terrorist attacks in the past few days resulted in big casualties. Today in my meeting with Sushma Swaraj the Indian FM, when she had a stopover in Tehran, we agreed on close cooperation to combat terrorism in the region. Enough is enough!” Araghchi said in a tweet.
In Iran, tens of thousands of people called for “revenge” at the funeral of the troops killed in a suicide attack by terrorists. Tehran has accused Pakistan of supporting them.
In India, at least 40 CRPF personnel were killed and five injured in one of the deadliest terror attacks in Jammu and Kashmir when a Jaish-e-Mohammad (JeM) suicide bomber rammed a vehicle with explosives into their bus.
Pakistan-based terror group JeM claimed responsibility for the attack on the CRPF convoy. In a major diplomatic offensive against Islamabad after the attack, India has highlighted Pakistan’s role in using terrorism as an instrument of state policy. (PTI)