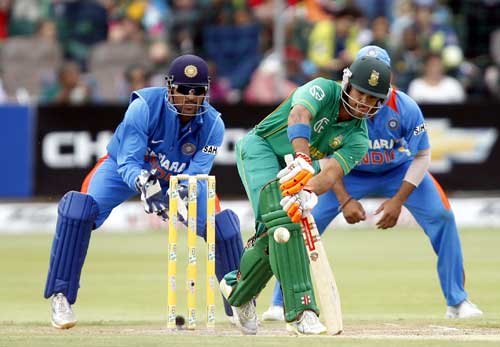 Cape Town, February 25: India survived a late onslaught by debutant Christiaan Jonker and edged South Africa by seven runs to win the third T20I in Cape Town on Saturday to clinch the series 2-1.
Jonker scored 49 off 24 balls to almost snatch victory from India, who, after posting 172/7, looked on course for an easy win by limiting the hosts to 52/2 in 10 overs. But skipper JP Duminy (55 off 41) and then Jonker almost took SA home before Bhuvneshwar defended the 19 runs they needed to win off the last six balls.
Bhuvneshwar finished with best figures of 2/24, while Jasprit Bumrah, Shardul Thakur, Hardik Pandya and Suresh Raina took one wicket each.
The match came alive in the last seven overs as Duminy and Jonker took the battle to the Indian bowlers. The hosts were struggling at 79/3 after 13 overs when the duo decided to change gears with a 30-run stand that came off just three overs.
Although Duminy fell looking for big shots, Jonker continued to trouble the visitors with some superb strokeplay. He almost took the hosts to victory before falling off the last ball of the match.
Earlier, India started the day with a setback as Virat Kohli was ruled out of the game with a stiff back, handing over captaincy duties to Rohit Sharma.
Shikhar Dhawan top-scored with his 47 while Suresh Raina contributed 43 as the visitors were asked to bat first. Raina was declared ‘Man of the Match’ for his all-round show as he chipped in with a three-over spell of 1/27.
Paceman Junior Dala (3/35) took three wickets while Chris Morris (2/43) accounted for two Indian wickets.
Rohit fell early to Dala but the left-handed pair of Dhawan and Raina added 65 runs for the third-wicket when the latter was removed by Tabraiz Shamsi.
Dhawan got two lives on 9 and 34, dropped on both occasions by Shamsi. He was then run out by Dala’s direct hit from the fence.
Manish Pandey (13) and Dhoni (12) couldn’t repeat their heroics from the last match and were sent back by Dala.
Hardik Pandya’s 17-ball 21 and Dinesh Karthik’s 13 off 6 then pushed India’s score past the 170 mark. (Agencies)