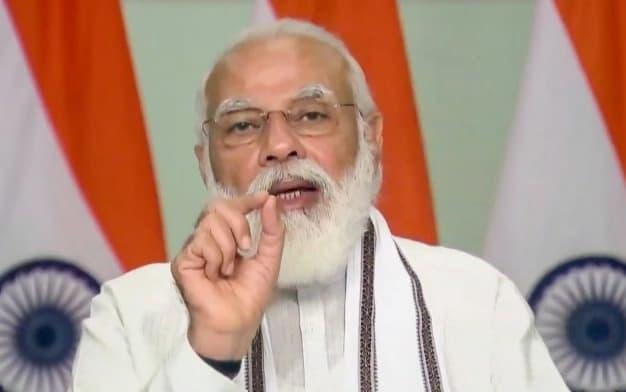 New Delhi, August 29: India has controlled the spread of crop-threatening migratory pest desert locusts by using advanced technologies, including drones, and ensured there was not much crop damage, Prime Minister Narendra Modi said on Saturday.
In his address after the virtual inauguration of college and administration buildings of Jhansi-based Rani Lakshmi Bai Central Agricultural University, the prime minister stressed on the need to promote greater use of latest technologies in the farm sector.
More than 10 states, including Uttar Pradesh, faced locust problem in the midst of the COVID-19 pandemic, he said adding that the Bundelkhand region faced the locust attack after 30 years.
Sharing how modern technologies are helpful in addressing the challenges faced by the farm sector, Modi said the speed at which locust swarms were spreading in the country, it was not possible to control them in traditional ways.
“In May, the Bundelkhand region had faced locust problem. …I was told the region faced the locust attack after 30 years. Not only Uttar Pradesh, more than 10 states faced the locust problem,” the prime minister said.
India has controlled this problem in a scientific way, he said.
“If there was no coronavirus, a week long positive media debate would have been carried on this. A big success has been achieved,” he added.
Asserting that the central government worked on a “war footing” to save crops from this pest, Modi said a dozen control rooms, including one in Jhansi, were set up and authorities procured special spray machines and distributed in the affected areas.
“Be it tractors or chemicals, all machineries were put in place to ensure farmers face less crop damage. To save tall trees, drones and helicopters were used for spraying. Following these measures, India has been able to save farmers from incurring huge losses,” he said.
Emphasising the importance of modern farm technologies, the prime minister exhorted young researchers and agri-scientists to work on ‘One life, One mission’ to promote technologies like drone or artificial intelligence across the country.
For the last six few years, the government has been making efforts to take farm research directly to fields and make available scientific advise to even small farmers, he said.
“From college campus to field, there is a need to further strengthen the ecosystem for experts. For which, Rani Lakshmi Bai Central Agricultural University will also play an important role,” he added.
India faced the menace of locust problem in Rajasthan, Madhya Pradesh, Punjab, Gujarat, Uttar Pradesh, Maharashtra, Chhattisgarh, Haryana, Uttarakhand and Bihar.
However, the problem now has been controlled to a large extent after timely measures were taken by both the Centre and state governments in about 5.66 lakh hectare area in affected states, as per official data.
Even the UN’s Food and Agriculture Organization (FAO) had in its August 24 update said the risk of swarm migration to the Indo-Pakistan summer breeding area has nearly subsided. (PTI)

Violations of law cannot be condoned under pretext of human rights: India to UNHCHR chief

Over 50% farmers oppose farm laws, but one-third of them have no info: Survey