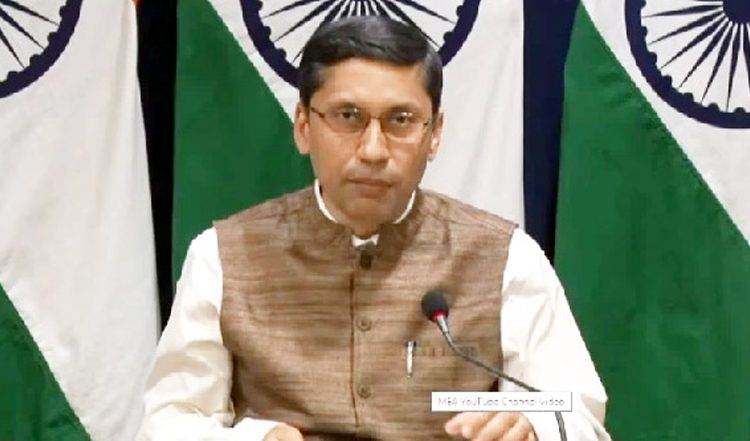 New Delhi, July 2: India and China in their talks last week agreed to maintain dialogue through diplomatic and military mechanisms to reach a mutually acceptable solution for complete disengagement from all friction points so as to enable progress in bilateral ties, the Ministry of External Affairs (MEA) said on Friday.

MEA Spokesperson Arindam Bagchi said the 22nd meeting of the Working Mechanism for Consultation and Coordination (WMCC) on India-China border affairs was held on June 25.
“Both sides agreed to maintain dialogue and communication through the diplomatic and military mechanisms to reach a mutually acceptable solution for complete disengagement from all friction points so as to enable full restoration of peace and tranquillity and enable progress in the bilateral relations,” he said at an online briefing.
The two sides also agreed that in the interim, they will continue to ensure stability on the ground and prevent any untoward incident, Bagchi said.
India and China have also agreed to hold the next round of senior commanders meeting at an early date, he said, adding that the date for that meeting is yet to be fixed.
India and China were locked in a military standoff at multiple friction points in eastern Ladakh since early May last year. However, the two sides completed the withdrawal of troops and weapons from the North and South banks of Pangong lake in February following a series of military and diplomatic talks.
The two sides are now engaged in talks to extend the disengagement process to the remaining friction points.
India has been particularly pressing for disengagement of troops in Hot Springs, Gogra and Depsang.

To another question on the ongoing visit of Secretary, Economic Relations, Rahul Chhabra, to some African nations, Bagchi said he is on a tour of a few countries in Africa including Ghana where he is leading the Indian side at the foreign office consultations.
Asked about extradition of Mehul Choksi and Nirav Modi from Dominica and the UK respectively, the MEA Spokesperson said he does not have any update on either of those cases but the ministry was “closely monitoring the ongoing legal proceedings”. (PTI)