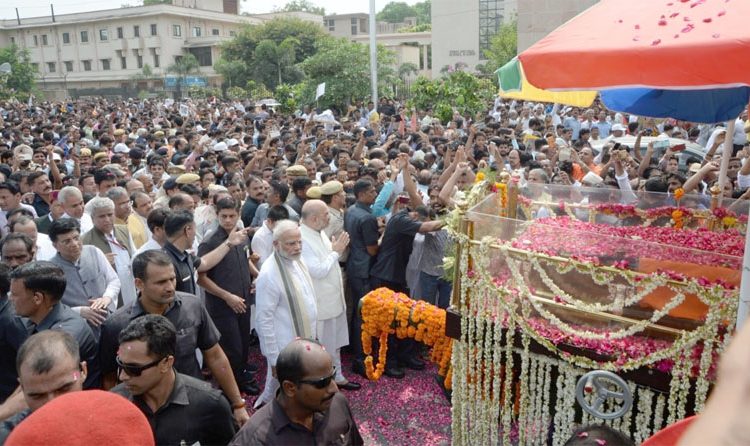 NEW DELHI, August 17: Bugles sounded the last post, uniformed soldiers gave a gun salute and silence fell over the crowd as former Prime Minister Atal Bihari Vajpayee’s mortal remains were consigned to the flames on Friday evening, the sun setting on the life of a poet-politician who combined accommodative politics with graciousness.
Foster daughter Namita Kaul Bhattacharya lit the pyre as cries of “Atal Bihari Amar Rahe” reverberated in the air and a light drizzle fell.
President Ram Nath Kovind, Prime Minister Narendra Modi, Congress president Rahul Gandhi and former prime minister Manmohan Singh were among the thousands of people at the Rashtriya Smriti Sthal on the banks of the Yamuna, the BJP patriarch’s final resting place along the stretch which also houses the memorials of Mahatma Gandhi, Lal Bahadur Shastri, Indira Gandhi and Rajiv Gandhi.
Several foreign dignitaries, including Bhutanese king Jigme Khesar Namgyel Wangchuck, Bangladesh Foreign Minister Abul Hassan Mahmood Ali and Pakistan’s Law Minister Ali Zafar were present as Vajpayee was cremated with full state honours.
The tricolour draping Vajpayee, who died on Thursday at the age of 93 following prolonged illness at the All India Institute of Medical Sciences (AIIMS), was folded and handed over to his granddaughter Niharika.
It was a sea of white, with most mourners dressed in the colour of mourning to remember the man who wove together pragmatism and his vision for an inclusive India. Some could be seen wiping their tears.
The intensity of the moment and the heat led to some mourners fainting. Among them was Khush Chaturvedi.
“I am not politically inclined but I wanted to meet (former president) Kalam and Vajpayee once. I couldn’t manage to meet them when they were alive, but I had to be here today,” the 27-year-old from Siwan in Bihar told PTI.
Thousands of mourners poured into the streets of the national capital as Vajpayee’s cortege made its way from his home to the BJP headquarters on Deendayal Upadhyay Marg and then to the Rashtriya Smriti Sthal.
As the crowds surged forward, some running, some walking, the prime minister and BJP president Amit Shah were among those who walked behind the gun carriage, decorated with flowers.
There were people everywhere, covering the roads along the route from the BJP headquarters to the Smriti Sthal from side to side, with security personnel maintaining strict vigil to ensure that nothing goes wrong.
These were extraordinary scenes last seen when Congress leader Rajiv Gandhi was assassinated in May 1991 and his funeral procession was taken from Teen Murti Bhavan to the banks of the Yamuna, said old-timers.
The crowds had begun gathering from last night itself as news came in of the death of the three-time prime minister — who joined the RSS in 1947, rose through ranks to become a stalwart of the BJP and was the first non-Congress prime minister to complete a full term in office. They first gathered at the hospital, then at his Krishna Menon Marg home and then at the BJP headquarters.
The young and old, men and women, some with children, collected outside the gates of the BJP office, anxious for a last glimpse of the late leader. Some clambered on a neem tree outside, desperate to be part of the proceedings but unable to get inside.
Inside, the prime minister and a host of ministers and party workers paid their last respects to the late leader, mourned by them and the opposition as one of India’s tallest leaders.
Hundreds of people filed past the body in silence, with a large portrait of a smiling Vajpayee — a BJP flag on either side — in the backdrop.
Earlier in the morning, hundreds of people chanted “Atal Bihari Amar Rahe” as Vajpayee’s cortege made its way from his home through the city to reach the BJP office about five kilometres away.
Mourners walked and ran beside the carriage, also chanting slogans like ‘Jab tak sooraj chand rahega Atal ji ka naam rahega (Till the sun and moon endure, so will Atal’ ji’s name)”, punctuated by patriotic cheers of ‘Bharat Mata ki jai’ and ‘Vande Mataram’.
In the crowd were Ganeshan, 38, and Chennaiah Nadesan, 45, who had flown in from Tamil Nadu.
“Achcha politician, achcha parliamentarian, pure man,” he said in a mix of Hindi and English after paying his homage.
Also in the crowd was Aakash Kumar, 25, who rode his scooter from Baghpat in Uttar Pradesh, about 70 km away.
“I was probably in Class 3 or 4, when I heard one of his speeches and got drawn towards him. I really liked his poems,” Aakash told PTI.
As eulogies were written, analysts took stock of the politician and the man and the city returned to normalcy, BJP leader Anurag Thakur said the massive turnout of people who had come to pay their respects showed he resided in the hearts of people.
Seen as a moderate face of BJP, Vajpayee first became prime minister in 1996, leading a shaky coalition whose members were suspicious of the BJP’s right-wing politics. It lasted for 13 days and collapsed after losing a vote of no-confidence.
His second stint as prime minister was in 1998 when the National Democratic Alliance (NDA) again came to power but that lasted for just 13 months.
Finally, the NDA with Vajpayee as PM returned to power in 1999 and was voted out in 2004. (PTI)