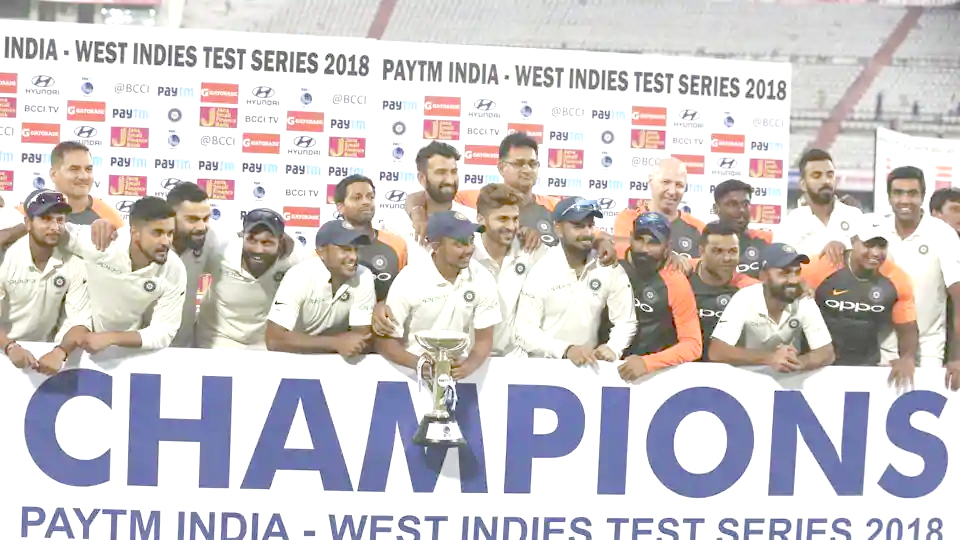 HYDERABAD, October 14: A clinical India completed one of the most ruthless clean sweeps in recent times, demolishing a listless West Indies by 10 wickets in the second Test, inside three days, to clinch the series 2-0 on Sunday.
Umesh Yadav’s maiden 10-wicket haul (6/88 and 4/45) on a decent track was the highlight as India reached the meagre victory target of 72 in 16.1 overs, courtesy unbeaten partnership between openers Prithvi Shaw (33) and KL Rahul (33).
While any Test series victory is welcome, it hardly was an ideal preparation for the big away-series against Australia, starting December 4 in Adelaide.
West Indies were back to their worst despite showing signs of fight in the first innings as they couldn’t last two full sessions and were bowled out for 127 in only 46.1 in their second innings.
Out of the four innings in this series, West Indies couldn’t cross the 200-run mark thrice which was a testimony to their plight during the series.
For India, it was their 10th series win at home since their last defeat against England way back in 2012.
Virat Kohli’s side did an encore of 2013 series which India won by an identical margin in that year’s most lopsided contest with Sachin Tendulkar’s
farewell taking limelight.
The second innings started with Yadav on split hat-trick but Kraigg Brathwaite (0) survived one delivery before gliding one into Rishabh Pant’s gloves.
Kieran Powell (6) edged one off Ravichandran Ashwin to Ajinkya Rahane in the slips.
Shai Hope (28) hit three delightful boundaries off Umesh while Shimron Hetmeyer (17) was trying to be more assertive against spinners in their 39-run stand.
However, a rush of blood saw Hetmeyer give Kuldeep Yadav the charge only to be caught by Cheteshwar Pujara at point.
From 45 for 3, there was not much resistance as Hope was snapped when he played a Ravindra Jadeja delivery for the turn to give Rahane his second catch.
West Indies’ biggest hope Roston Chase (6) got a sharp inswinger while Shane Dowrich (0) played on with Umesh getting his ninth wicket of the match.
The wicket had its share of wear and tear but it wasn’t a difficult track where surviving would be an arduous task. Yet, it was another instance of lack of application from the West Indies batsmen with opener Brathwaite and young Hetmeyer playing atrocious shots.
Jason Holder (19) and Sunil Ambris (38) added 38 runs for the seventh wicket but once Holder edged one to Pant off Jadeja, any chances of match going to fourth day slowly disappeared.
However, West Indies had started off well by dismissing India for 367, keeping the first innings lead down to a mere 56 runs.
In the process, they denied Rishabh Pant (92) and Ajinkya Rahane (80) from reaching their hundreds.
In a space of 16.1 overs, India lost five wickets for 25 runs to move from a comfortable 314 for 4 to 339 for 9 before Ravichandran Ashwin (35, 83 balls) made a useful contribution. (PTI)