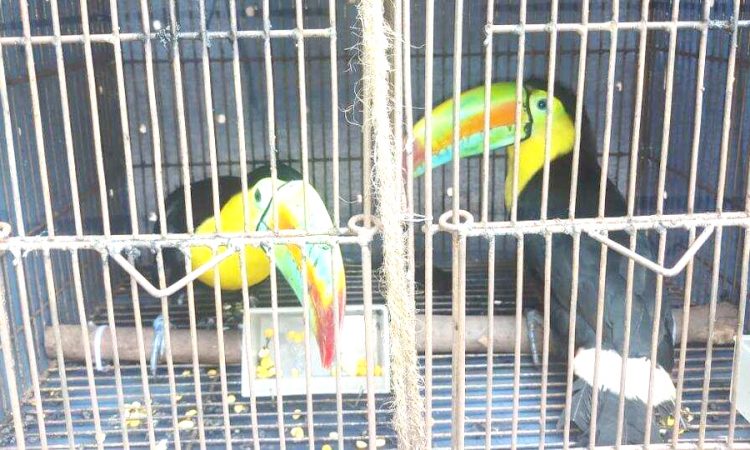 While in 2018, the BSF’s south Bengal Frontier had seized 22 such consignments, in 2019 the number went down to 13. This year, however, despite the pandemic and the lockdown when infiltration had dropped, the BSF has seized at least 25 consignments till October. (HT Photo)

Kolkata, October 31: The highly porous India-Bangladesh border in south Bengal has witnessed a spurt in wildlife smuggling this year, a top official of the Border Security Force has confirmed.
While in 2018, the BSF’s south Bengal Frontier had seized 22 such consignments, in 2019 the number went down to 13. This year, however, despite the pandemic and the lockdown when infiltration had dropped, the BSF has seized at least 25 consignments till October.
The last in the line is the rescue of 13 white cockatoos on Thursday which are native of Indonesia and were being smuggled into India through the international border in North 24 Parganas district.
“There has been a rise in animal trade, mostly birds, in this year. We are trying to analyse the trend. There has been no specific reason which has come to light so far. The BSF is alert and keeping a watch,” said SS Guleria, DIG of BSF’s south Bengal frontier.
Senior officials of the BSF said that this year till date around 14 gecko lizards, 31 cockatoos, 77 parrots and 95 pigeons have been seized. In 2019 only around 64 pigeons and 46 parrots were seized.
The list of exotic bird pets seized this year include eight helmeted-curassow, a large terrestrial bird usually found in forests of south America, macaws and keel billed toucans, among others. The cost of some of these birds such as the curassow, toucan and macaw can run up to lakhs per pair.
The India-Bangladesh border in West Bengal is the longest international border in any state across the country. Out of the 4096.7 km long border, West Bengal alone shares 2216 km with the neighbouring country.
In 2017, 2018 and 2019, security agencies arrested 1175, 1118 and 1351 people, respectively, along the entire stretch of the Indo-Bangla border in India, according to data presented by the Union ministry of home affairs before Parliament in March.
“In most of the cases the traffickers managed to flee taking advantage of the dense vegetation and darkness abandoning the boxes containing the birds. The birds were sent to the zoo in Kolkata after being rescued. Only four persons have been arrested this year,” said a BSF official.
The lockdown had taken a heavy toll on infiltration attempts across the country’s longest and most porous international border – the Indo-Bangla border in West Bengal. Smuggling activities however were still going on.
Data shared by the Border Security Force shows that around 20 persons were arrested while they were trying to enter India in April and May – the two months in which total lockdown was observed – this year. In 2018 and 2019, the BSF had arrested 314 and 171 persons during the same period. (Courtesy: HT)